“33 1_3 HOUSE OF DREAMS” at the San Diego Repertory Theatre 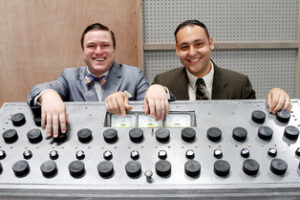 Well, whether you do or don’t, you’re gonna love the ebullient world premiere musical at the San Diego Repertory Theatre.

You’ll not only love it, you’ll learn something – about the early days of pop/rock, and the small, wildly successful independent Hollywood recording studio that created the West Coast sound and churned out over 100 Top 40 hits from the 1950s-1970s. You’ll also learn what it is to have a dream, and pursue it against all odds (and often, against the needs of your family).

“33 1/3 House of Dreams” is a labor of love, written by San Diegans Jonathan Rosenberg and Brad Ross.

Ross’ father, Stan Ross, is the main character, a New Yorker who became a recording engineer and the heart, soul and magnetic personality at Gold Star Recording Studio. (“It’s these ears,” he says multiple times, to explain his success in picking hits and hitmakers, regardless of ethnicity, rarity at that time.

In the new musical, you’ll not only hear a ton of great songs – from “Summertime Blues” and “Good Vibrations” to “La Bamba” and Cher’s “All I Really Want to Do.” You’ll also witness the ups and downs of the relationship between Ross and his wife, and between Ross and his partner, Dave Gold, who was the engineer whom Stan calls “The 8th Wonder of the World,” who built the “Cadillac of sound boards” and made the echo chamber Wall of Sound for Phil Spector (excellent Collin Leydon), the notoriously difficult (currently imprisoned), Manischewitz-swigging producer, and transformed many other creative ideas into a physical reality, though he often did it on the cheap.

So, this is not just another jukebox musical. The story is true, the relationships are thoroughly believable, and the musical history is significant, instructive and exciting.

Since 2010, The Rep has been partnering with the San Diego School for Creative and Performing Arts to provide large-scale summer musicals. It has been a successful and mutually beneficial arrangement. The kids get to perform in a professional production – and in this case, be part of birthing a new musical. The Rep is availed of an impressive amount of young talent, which allows them to have a cast of 26 and a killer 21-piece band.

The caliber is so high, you can’t tell the students from the pros. This is especially true of the two girl-group trios: Annabelle Skala, Danika Hughey and Olivia Kuykendall, who are delicious fun singing “I Love How You Love Me” and others; and Kenndy Harris, Kiara Geolina and Janae Parson, who are outstanding singing “Be My Baby” and others; Parson also does a mean, shimmying Tina Turner.

A total of nearly three dozen SCPA students are part of the production, and they sparkle. Some of them even learned to play an instrument just for this production.

Director/choreographer Javier Velasco has given them engaging and energetic dance moves (they even do the Frug and the Mashed Potatoes!), while musical director Steve Gunderson has created terrific arrangements, including several ingenious song mashups, a unique and special skill at which he excels.

The short scenes, brief interactions and abbreviated recording sessions could make the piece choppy, but Velasco brilliantly and seamlessly weaves it all together with dance segues and other inventive means of keeping the action flowing at all times. He’s also perfectly capable of slowing things down for the intense, emotional or sweetly romantic moments.

Rosenberg and Ross’ libretto is clever, touching and frequently funny. The story jumps back and forth in time, from the older Ross and Rose, being part of the filming of a TV documentary about Gold Star Recording Studio, to the early and later days: the recording sessions, the tiffs and romances, the end of Gold Star (which closed its doors in 1984).

The conceit works fine, especially in the hands of top-notch professional actors. There could be a little less didactic recap at the end (we already know the story), which would help tighten the second act and the conclusion (prepare to get up and boogie after the curtain calls).

Nicholas Mongiardo-Cooper is marvelous as Stan – warm, humorous, charismatic and driven. As the wife who always supports him but often gets left at home to raise their two sons alone, Aviva Pressman gives a beautifully grounded, nuanced performance. Jacob Caltrider captures the essence of sensible, frugal Dave Ross, and Bethany Slomka is bubbly and amusing as his wife.

Michael Parrott, Christine Hewitt, Ron Christopher Jones, Dave Rivas and Bear Manescalchi create a multitude of characters to fill in the lives of Rose and Ross (who died in 2011, prompting his son’s interest in celebrating his legacy).

This is a huge undertaking for the creators and for the Rep, which clearly has a hit on its hands. If the show goes forward – and it certainly should! – the personnel will have to be pared down considerably.

So enjoy “33 1/3” while it’s here in its expansive form. This production is so entertaining and effervescent that it’s positively irresistible – at any age.