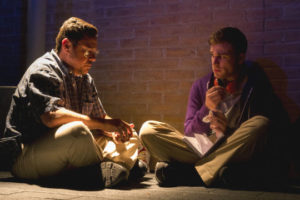 The employees at the Hobby Lobby in Boise are a damaged lot, each seeking something just out of reach.

Leroy (excellent, knife-edge Markuz Rodriguez) is a frustrated, angry, aggressive guy trying to shock people out of complacency by means of his smutty, incendiary t-shirt art.

Enigmatic Anna (self-deprecating Carla Navarro), she of the abusive background, dropped out of high school but loves to read, yearning for dramatic endings and tragic deaths in her stories.

Young Alex (intense, believable, unnerving Devin Wade), who constantly threatens suicide, is a broken adolescent, abandoned by his parents in infancy, withdrawn into his blank-eyed, body-hugging, spectrum-behavior inner self. His step-brother, Leroy, has tried to protect him, and has introduced him to the arts. Alex tries to create ‘music’ from his random, tattered thoughts.

Into their midst comes Will (superb, tightly wrapped Salomón Maya), a recent transplant from a small town upstate that he has fled due to a scandal at his evangelical church. He’s trying to start a new chapter of his life, by re-connecting with his son, Alex. Will is surreptitiously writing an evangelical blog, using his religious fanaticism as a protective shield, hoping that the coming Apocalypse and the Rapture will grant him absolution and redemption, and nullify the meaningless of his empty, self-defeating life.

Playwright Samuel D. Hunter won an Obie (Off Broadway) Award for “A Bright New Boise” in 2011. He’s a marvelous writer, best known for 2002’s “The Whale” (produced here at Cygnet Theatre in 2015). His plays typically take place in his native Idaho. His characters are uniquely disturbing; his plots and dialogue are disquieting, unpredictable and uncomfortably real.

In this case, the setting is the break room of a craft store, a notoriously anti-union company that keeps workers from achieving full-time employment and benefits. Hunter chose this questionable business before the narrow-minded, homophobic biases of the chain became common knowledge.

Each of these characters, in the grip of dehumanizing corporate control, caught in the vortex of quotidian desperation, makes an effort — religious zealotry, music, art, literature — to bring structure to a hopeless, dead-end existence.

The play begins in a darkly comic vein, but tension builds and the drama becomes increasingly unsettling. Hunter knows exactly how to grab an audience by the throat and throttle them.

Director James P. Darvas, new artistic director at OnStage Playhouse, has begun the company’s 44th season by elevating it from a community theater to a professional one, paying actors a stipend and attracting experienced performers of a high caliber.

His outstanding ensemble brings nuance and multi-dimensionality to these disenchanted and disenfranchised loners.

The set, a drab break room and its adjacent dim outside alley (designed by Jadelin Boldenow and excellently lit by Erica Livingstone) convey the colorlessness of these lives.

This potent, piercing piece of theater, extremely well executed, is all about the boundaries of faith, family and forgiveness. It may be unsettling, but you shouldn’t miss it.