“CANADA THE MUSICAL” at the Ryan-Carter Gallery; Canmore, Canada 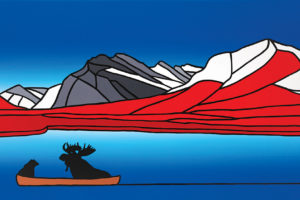 O Canada! (as the national anthem has it). Who knew the depth and breadth of musical talent you harbored and launched?

Well, the creators of “Canada the Musical,” that’s who.

A dream venue created in the fun, arty town of Canmore, not far from Banff in the Canadian Rockies, the Carter-Ryan Gallery combines the shared passions of its co-founders:  the painting and sculpture of Cree visual artist Jason Carter and the love of performing arts of his life-partner, actor/singer/playwright/director/TV host Bridget Ryan.

Ryan serves as writer, director and producer of “Canada the Musical,” a small revue that musically traces the history of our warm-hearted neighbor to the north.

In an intimate, 30-seat space within the gallery, with one of Carter’s stunning, Crayola-colored Canada landscapes as backdrop, three talented, flexible performers (Katelyn Morishita, Daniela Fernandez and Nicholas Rose) strut their stuff and pour their hearts out in this “love letter to Canadian music.”

The story starts in 1576, on the shores of Halifax, with a First Nations chant, reportedly the first documented song in Canadian history.

The show visits each area of the huge country (larger than the U.S., though it has 1/10 the population), with a range of regional dialects and inside jokes like “The Little Black Flies” of Ontario, that had Canadians (most of the enthusiastic audience) in stitches.

From the origin of the national anthem to “The Poor Little Girl from Saskatchewan,” to the first CBC broadcast in 1923 and its Schlitz beer commercials, the 70-minute revue quickly makes its way to the highlights and superstars of Canada, including the piano virtuosi Oscar Peterson and Glenn Gould. And all the high-profile pop performers: Anne Murray, Gordon Lightfoot, Brian Adams, Enya, Kenny G, Shania Twain, Nellie Fertado, Alanis Morisette, Celine Dion and of course, Leonard Cohen and Joni Mitchell.

That’s a veritable cornucopia of talent; all the names are ticked off, though some get no songs, some 2 or 3, in excellent imitation of the style and moves of the star performers.

Alanis’ “One Hand in My Pocket,” Carly Rae Jepson’s “Call Me Maybe,” and “Raise a Little Hell” by rock band Trooper sound especially good. And Leonard Cohen’s “Hallelujah” brings the requisite sigh of recognition and nostalgia.

All told, it’s a light, fun intro to the pride of Canada, in a delightful setting.

This is only the second year of the performance space, with three other shows running this summer and more planned for next year.

One never tires of the gorgeous views and long long summer days in that area, but a little music and good-natured national pride provide the cherry atop the glacier.