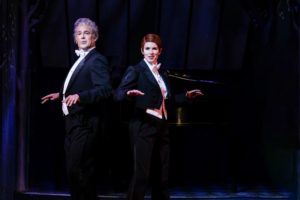 All the ingredients are there: strong actor/singers, excellent dancers, gorgeous costumes, a 21-piece orchestra, timely issues of gender and sexual identity, and a Paris setting.

But alas, the soufflé falls flat.

“Victor/Victoria” has a long history: it began as a 1933 German film, “Viktor und Viktoria,” and was made into a British-American musical movie in 1982, written and directed by Blake Edwards and featuring his wife, the incomparable Julie Andrews, who also starred in the 1995 Broadway musical theater adaptation.

Maybe there were too many high-profile cooks for the stage version. Composer Henry Mancini, known for his soothing elevator-type music, died before the score was completed; it was taken up by Frank Wildhorn, known for overblown scores like “Jekyll and Hyde.” Leslie Bricusse wrote some clever lyrics (especially for “Chicago, Illinois,” which is totally nailed by hilarious Bets Malone as a ditz-brained gangster moll). Additional lyrics were contributed by Wildhorn. Blake Edward wrote the book.

In the Moonlight Stage production, much of the humor and many of the laugh-lines don’t land. And the LGBTQ Issues — not to mention the two central love stories — seem to be sidelined by the extreme amount of dancing and big chorus numbers. This isn’t a show about dance.

It’s about a down-on-her-luck 1930s English soprano (Allison Spratt Pearce) who takes shelter one rainy night in a gay/drag bar, and meets a cynical, flamboyant, middle-aged gay man (Lance Arthur Smith, less flamboyant and fey than he should be at the outset, though he ‘grows into’ the role in the second act). He becomes her friend, supporter, protector and promoter. As they trade confidences, he admits that he wishes he were a woman, while she fantasizes about what it would be like to “live without permission from a man “(“If I Were a Man”).

Victor becomes the toast of Paris café society. When ‘he’ meets King Marchan (Hank Stratton), the womanizing Chicago mobster, they’re both smitten. The attraction threatens King’s masculinity, while at the same time, he seriously doubts that Victor is a man. All this gayness emboldens King’s bodyguard, “Squash” (Johnny Fletcher) to uncover his own  true self.

Honesty, deception and sexual identity are running themes. At this moment in history, the show should pop — for many reasons. Yet, it has a weak score, and it’s too long for its own good.

That said, Spratt Pearce, a beloved local actor with Broadway credentials, gets to display her prodigious triple-threat talents, including first-rate dance moves and a stratospheric high note that can smash a chandelier.

When she’s playing Victor, her bodice isn’t bound, so the fact that she has breasts is not obscured , making it a little harder to buy her as a man.

Her best song is probably the show’s best known, “Le Jazz Hot.” Despite multiple other big chorus numbers (schmaltzily helmed by director/choreographer John Vaughan), most of the songs are not memorable or readily hummable.

The source of the stunning sets and costumes (originally designed by Robin Wagner and Willa Kim, respectively) does not seem to be noted. But they are notable. The lighting (Jean-Yves Tessier) and sound (Jim Zadai) are notable as well, and the 21-member orchestra is superb, under the baton of music director/conductor Lyndon Pugeda.

This is a big, splashy production of a show that needs considerable re-thinking and retooling. After nearly 25 years, that’s unlikely. But it’s nice, after all these years, to see a musical that no other local company has produced. Moonlight continues to awe, with its knockout productions of older works (their “West Side Story” was nonpareil) and chance-taking with lesser-knowns.