“THE TEMPEST” at The Old Globe 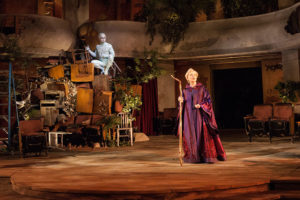 Many scholars believe that “The Tempest” was Shakespeare’s swan song—his poetic farewell to the stage, relinquishing the power of his pen just as his “Tempest” stand-in, Prospero, abandons his magic and returns to his former life. Some have interpreted the play through the lens of colonialism, with the exiled Prospero as imperialist and the island residents, Ariel and Caliban, as his minions. Seizing power is indeed a recurrent theme.

But there are no dark shadows in The Old Globe’s buoyant, ebullient production, whimsically directed by Joe Dowling. The emphasis is on the magic of theater, and by extension, the enchantment of this island, with its sprites, spirits, and lilting calypso sound.

Prospero, the former Duke of Milan, persuasively feminized as Prospera, was banished 12 years ago, when her evil, envious brother usurped her title, setting her and her baby girl adrift.

Now, everything comes full circle. All her conniving, conspiring enemies are sailing near the island where Prospera, with the aid of the written word—her many beloved books— has become a sorceress, and mistress of the isle.

She conjures a storm that will make them believe they’re shipwrecked, and scatters them about her fantastical domain. What follows is loss and reunion; transgression and forgiveness; and the blossoming of young love.

Prospera’s charming daughter and the son of the King of Naples, are smitten on sight. But all the secondary characters are backgrounded here, except for the hilariously vaudevillian inebriates, Stephano and Trinculo.

The focus is on the wondrous central trio: captivating Kate Burton as a commanding Prospera, seething with anger and vengeance, but also soft-hearted, benevolent and delighted by her daughter’s romance.

The awesome opposites, Ariel and Caliban, both serving under duress, one agreeably the other venomously, are obverse even in their unitards: one bespangled, one besmirched.

The costumes are wildly imaginative, and the lighting and original music add striking depth to this phantasmagoria, plunked down in a tumbledown theater jam-packed with backstage detritus, and dripping in island greenery.

The text has been trimmed and rearranged somewhat, but the language is beautifully expressed, as is the entire vision: a giddy celebration of female force, theatrical ingenuity and the power of performance.