“NATIVE GARDENS” at The Old Globe 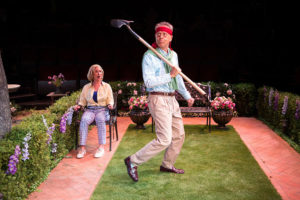 And yet, the play manages to make a molehill out of this mountain of issues.

The setup is potentially intriguing: a young couple and an older couple, with adjacent yards, and a dispute about the property line between them.

In re-landscaping the garden, the young, pregnant newcomer is fiercely committed to the use of “low-maintenance, high impact” native plants that will help the environment. She’s aggressively opposed to her neighbors’ proper English garden, with its neat, pristine, non-native plants and flowers that discourage bees, bugs and butterflies.

There are definitely some funny lines here, as when the older man, Frank, asks incredulously and indignantly, “Are you calling my plants immigrants?”

But the argument becomes so petty, shrill, spiteful and immature, escalating into a four-way scream-fest, that it undermines the seriousness of the situation. It was, after all, the ubiquity of neighbors’ property disputes that inspired the playwright, Karen Zacarías.

While her play is mostly very realistic and on-the-nose, the direction, by Edward Torres, is often highly stylized, with exaggerated slo-mo action and synchronized movement that is only sometimes effective—most amusingly with the nearly identical, bearded Latino workmen.

And then there’s the ending: a strangely sharp tonal shift that ties everything together with a big red bow – playing out every character’s fantasies in a stylistic mismatch with the rest of the play. A fantasyland finale, indeed.

The comedy is making its West coast premiere at the Old Globe which presents a beautifully understated, cleverly constructed design. But there’s a considerable amount of overacting, and the piece comes off as sophomoric, trivializing the crucial and amplifying the trivial.