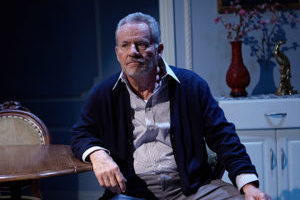 You get a growing sense of disorientation as you watch “The Father,” the award-winning drama at North Coast Repertory Theatre.

There’s a fraught father-daughter relationship, and there are a couple of men and women who cycle in and out of their sphere. But initially, it’s hard to determine who’s who, or what the timeframe is relative to the first scene.

Are we in André’s flat in Paris? Or perhaps his daughter Anne’s in London? Which one of those men is her husband, or boyfriend, or ex?

Gradually, as we watch André become increasingly confused, we realize that we’re seeing the world – and his frightening, perplexing place in it – through his eyes.

No diagnosis is mentioned, but clearly he has some sort of dementia, and he’s unaware or in total denial about it – blaming his frequent losses on theft by caregivers, his misunderstandings on people trying to trick him.

André can be charming and witty, but he’s also a confabulator (saying that he used to be a tap-dancer, or a circus performer, when in fact, he was an engineer), and prone to anger outbursts, due to disinhibition and frustration. His mind is a disturbing place to spend 100 minutes of your time.

The tragic drama is unequivocally provocative and unsettling. Anyone who has dealt with Alzheimer’s or any other dementia will recognize many of the behaviors – and the family frustrations. As the population ages, those who haven’t had these experiences yet, will.

Fortunately for us, North Coast Repertory Theatre has snagged the West coast premiere of “The Father,” and director David Ellenstein has done a marvelous job of bringing it to light, keeping it moving at a clip and engaging us with alternating laughter and distress.

The best dramas, and works of art, are often tough to take. The subject matter shouldn’t turn you away. Curiosity, the desire to see an excellent production of a highly awarded play, and exposure to challenging art, should attract theaterlovers, not deter them.

Ellenstein has cast a superb ensemble, helmed by the magnificent James Sutorius (L.A.-based, but seen here a number of times at The Old Globe and La Jolla Playhouse). He captures an expansive range of emotions, and there isn’t a false note in his performance, which is chillingly real.

As his faithful but put-upon daughter, L.A.-based Robyn Cohen is also excellent, enduring disparagement (André repeatedly tells her that her sister was his favorite) and endless frustration.

The rest of the roles are considerably smaller, and embodied by some of San Diego’s finest, truly an embarrassment of riches: Richard Baird, Shana Wride, Jacque Wilke and Matthew Salazar-Thompson. All are convincing, but some of the secondary characters are better defined than others.

It may not be a comfortable or comforting evening of theater, but it’s a deep, powerful, thought-provoking and rewarding one.