“THE SQUIRRELS” at the La Jolla Playhouse 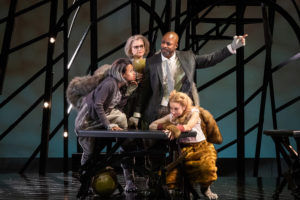 Portrait of America as Nuthouse.

“The Squirrels,” the latest creation from the wild (and wacky) mind of playwright Rob Askins (Tony-nominee and Obie Award-winner for the hilariously wicked “Hand to God”) is having its world premiere at the La Jolla Playhouse.

And like the paterfamilias at the end of the 90 minute piece, it’s uncontrollably overstuffed.

“I’m up for anything to de-stabilize the audience’s experience,” Askins has said. And that he does.

The set (the brilliant work of Tony-winner Beowulf Boritt) is a metal, abstracted tree, with multiple levels, beautifully lit (by recent Tony winner Tyler Micoleau). We meet the gray squirrels and red tree squirrels, already doing battle for the caches of nuts, with winter approaching. They sport squirrel-like paws and independently moving tails (terrific costumes by Paloma Young) and yet, they’re disturbingly human. We arrive ready to enter their world.

But first, we get a lecture. Honestly, an audience never needs to be lectured to. If we watch carefully, we can get a perfectly adequate sense of common squirrel behaviors and terminology, and if we don’t quite believe or understand everything we see, we can always look up the facts later. I actually did my squirrel research before the play, and I now know more about squirrels than I wanted or needed to know, fascinating and complex though they may be.

One interesting fact I learned—not from the lecture by the Scientist  (the amusing Brad Oscar), who morphs into the devious, scheming  squirrel, Sciuridae, and then back again, wearing his lab coat over his massive tail)— is that squirrels have been shown to possess memory and abstract thought. Hence, they can lie and deceive—a skill set the human species has perfected to an artform.

Memory is an issue for Scurius (wonderful Terence Archie), the father of the Gray Squirrel clan at the center of the action. He’s aging, he’s losing it, and he can’t remember where he’s hidden the tons of nuts he’s squirreled away (so to speak).

His wife, Mammalia (marvelous Candy Buckley) and daughter, Chordata (wonderfully solid, credible Lakisha May) are supportive at first. But then, when a red squirrel, Carolinius (hunky Marcus Terrell Smith) comes to them in need, they shift loyalties, and try to help him (Chordata actually falls for him, and ‘mucks’ with him).

Adopted daughter Rodentia (deliciously nasty Summer Spiro) sides with Sciuridae, the Bad Guy, against her family. Things take a turn for the worse, as the red squirrels are starving, the grays are hoarding, and the forest is being cut down around them.

This piece has a lot less humor than “Hand to God,” although it does elicit a few chuckles. With its Latinate names and Lear-like setup, “The Squirrels” has all the makings of an epic, an allegory, a tragedy and a cautionary tale all rolled into one.

The squirrels exhibit erratic, unpredictable actions and allegiances, and less-than-savory tendencies toward racism (discriminating by color and locational caste), random hypersexuality, hoarding and hunger for absolute power. In fact, they actually display all seven of the Deadly Sins—pride, greed, lust, envy, gluttony, sloth and wrath.

The behaviors, while intriguing and magnificently enacted, thanks  to Christopher Ashley’s expert and imaginative direction, tend to become repetitive. And the violence turns excessively gory. Gotta love that expanding pool of blood (how’d they do that??). But then, these are animals who can adopt a stray baby as readily as they can eat their own young.

The play isn’t quite yet where it needs to be. It requires more honing ,tightening and focus. It seems to be trying to do and say too much.

At the end, the message, which has been somewhat subtle up to then, is hammered home as a clear call to arms. As the situation becomes more ominous, the dead pile up and survival becomes a serious challenge, the final words uttered are: “Someone would have to do something now, right now—other than make noise.”

Words of wisdom— from a rodent.