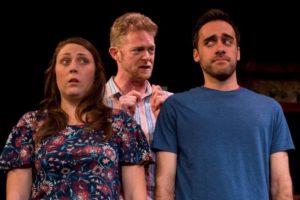 Seven days to rehearse one of the greatest tragedies in all of literature. What could go wrong?

It’s summer stock theater on Cape Cod. The actress playing Juliet has just bailed for a gig Off Broadway. Her replacement has never performed in a Shakespeare play before – and she’s afraid to die onstage. She thinks Romeo’s last name is Monta-goo. And she finds “alack” to be the funniest word she’s ever heard.

On top of all this, there are rehearsal room ‘fatal attractions,’ as the title intimates.

The play is smart, witty, clever—and it actually teaches a thing or two about acting, passion, commitment and the world-famous tragedy of star-crossed lovers. These backstage would-be lovers are kind of star-crossed, too.

Keen-eyed, textually and comically oriented director Kim Strassburger helms a wonderful trio of actors, including Michael Silberblatt, a New York-based San Diego native, who was a student of Strassburger at the Coronado School of the Arts a decade ago. With his maximally expressive face and unswerving conviction, he makes for a first-rate Romeo.

Michelle Marie Trester is a riot as the wide-eyed, hyperverbal new Juliet. Nancy has never ventured out of Utah before (“except to Idaho, but who counts that?,” she says). And yet, during the intense rehearsal period, she gains personal and theatrical insight—and a love interest—though her Romeo’s attentions are elsewhere.

Guiding the actors through the text is a magnificent Brian Mackey as Simon, the director who is by turns patient, helpful, instructive, nonplussed and apoplectic. It’s a terrific performance.

With crackerjack comic and dramatic timing, the three play off each other brilliantly. The rehearsal room set is put to excellent use for the play’s final moments.

Except for the puzzling choices for inter-scene musical interludes, everything about this play and production is pitch-perfect and irresistible.