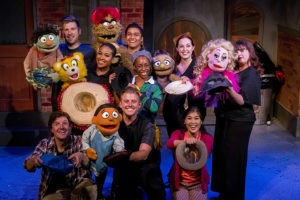 The show is billed as an X-rated puppet musical, with foul language, puppet sex and full puppet nudity. It is all of those (parental advisory included).

But it’s also very poignant—and it really is about something:  the hard facts of growing into adulthood, realizing that you’re probably not as special as your parents and teachers said you were, and you most likely won’t change the world. But it’s time to accept who, what and where you are, “For Now,” as the song has it.

When it opened on Broadway in 2003, “Avenue Q” garnered three Tony Awards, including Best Musical, and ran for 2500 performances.

New Village Arts brings both the humor and heart of the musical to its delightful production, with excellent ensemble work under the skillful direction of AJ Knox, the company’s director of connectivity.

Standout performances by the doubling actors Zachary Scot Wolfe, displaying his million dollar smile as Princeton (who sings the plaintive lament, “What Do You Do with a B.A. in English?”) and stone-faced Rod, the closeted Republican roommate of sloppy-but-affable Nicky, who lives in the same building as porn-dog Trekkie Monster (who sings the unforgettable ditty, “The Internet is for Porn”)—both terrifically played, in wildly different voices, by versatile Tony Houck.

Gerilyn Brault is heart-rending as smart but boyfriend-less Kate Monster. Cashae Monya is the funniest Gary Coleman I’ve ever seen (a dated reference for sure, he’s the superintendent of the Avenue Q buildings, now that he’s done suing his parents for swiping all his hard-earned youth-actor money). Melissa Fernandes brings sass, if not extreme sexiness, to Lucy the Slut, and she’s funny as Kate Monster’s supercilious supervisor, Mrs. Thistletwat).

Princeton has just graduated from college and snagged a job—from which he’s laid off before he even starts. Looking for an apartment in New York, he began at Avenue A, but couldn’t find anything in his budget, so he’s worked his way through the alphabet until he lands at Avenue Q.

All its residents are disappointed and disaffected, lost and drifting 20 to 30-somethings who aren’t quite making it —let alone fulfilling their dreams.

Idealistic Princeton is convinced that all will be well when he discovers his life’s “Purpose,” which actually only serves to stymie rather than propel him forward.

The often hilarious book (Jeff Whitty), music and lyrics (Jeff Marx and Robert Lopez, the latter of “Book of Mormon” and “Frozen” fame) instructively, amusingly demonstrate that “Everyone’s a Little Bit Racist,” we all have “Schadenfreude” (“taking pleasure in other people’s pain”), and “There’s a Fine, Fine Line” between “love and a waste of your time.”

Each character has a backward-looking longing: “I Wish I Could Go Back to College.” Since they can’t, all of them feel, at one time or another, “It Sucks to be Me.”

The conceit here is that the puppeteers are visible, mirroring the moves and emotions of their soft, furry characters. The humorous, costume-changing puppets are rented, but their outstanding manipulation was clearly helped enormously by the consummate Puppet Coach, Lynne Jennings, chief administrator of the San Diego Guild of Puppetry. The choreography of puppets and actors (Jenna Ingrassia-Knox) is quite clever, and well executed.

Whether it was the sound/mic balance or articulatory imprecision at high pitches, it was  at times difficult to understand some of the lyrics on opening night; this was especially true of the Bad Idea Bears (Jasmine January and Chris Bona) who represent an amusing personification of our absolute worst instincts.

As Christmas Eve, the Japanese fiancée of wannabe comedian/loser Brian (Steven Freitas), Ciarlene Coleman has the best voice I’ve heard for that character, not to mention a surprising sexuality, but much of her comic bits are based on the character’s heavily accented pidgin English—which was underplayed or absent here, significantly diminishing the humor of the role.

The offstage five-piece band, under the baton of music director/keyboardist Nina Gilbert, is first-rate, as is the singing throughout—including some terrific harmonies.

I wouldn’t want to live on Avenue Q—but it’s a great place to visit. The show and its denizens are   raunchy, sidesplitting and totally irresistible.