“HAIR” at the OB Playhouse 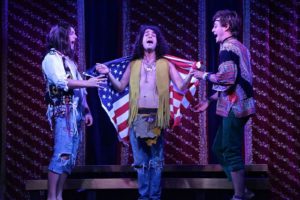 The youth revolution was an age of unparalleled camaraderie and anti-war simpatico, punctuated by battles with parents over hair, music, tuning in and turning on. It was flower power and free love. That was the great part.

But the downside was the Draft, and guys you knew going off to Vietnam and maybe not coming back.

“Hair,” the groundbreaking 1967 Tribal Rock Musical by Galt McDermott, Gerome Ragni and James Rado, is celebrating its 50th anniversary this year. And though some of its references are dated, it captures that freedom-seeking hippie zeitgeist.

The plucky O.B. Playhouse perfectly captures that heady time, in all its fringed, bell-bottomed, counterculture extravagance.

Another sad thing is that a really good production exposes the flaws in the musical. “Hair” has some great songs: “Let the Sunshine In,” “Aquarius.” But it also has plenty of clunkers – and too many songs altogether, with too little dialogue and almost no plot.

But director Jennie Gray Connard and musical director Kirk Valles have pulled out all the stops, marshaling a vocally potent 15-member cast that really looks the part. Their sexy writhing and stoner haze feel real and organic. Even the famous nude nanosecond is there. The show is totally uncensored, with all its provocative racial, sexual and political language.

At the center, Justin Tuazon is terrific as Berger, the Tribe’s ringleader, drug-dispenser and resident bad-boy. His antic moves and singing are great. Chris Chiles has the wide-eyed beatific look of Claude, the spiritual but ambivalent seeker whose lengthy hallucination re-enacts seminal moments in American history – with extreme bias and often hilarious exaggeration.

Though it does go on, it’s still really good fun – with a rockin’ four-piece band, flowers for all, and performers cavorting with the audience.

This production is ebullient and trippy, a smoky snapshot of a wild, crazy, love-filled and ultimately disenchanted time.