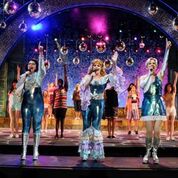 It all depends on how you feel about ABBA (the Swedish pop group), or jukebox musicals (in general), or “Mamma Mia!” (in particular).

If you like any or all of the above, you’re gonna love the Moonlight Stage production. Truth be told, I’m not a fan of any of the aforementioned, yet I was totally smitten by this show.

You may never see a better production of “Mamma Mia!” than this San Diego regional premiere. Immediately after opening, it was an instant hit. The demand for tickets was so high that “Mamma Mia” became the highest-grossing show in Moonlight history.

Every element of the production is superb.

The set is attractive and the costumes are aptly disco glitz/glam and often hilarious (set, costumes and props were rented from 3-D Theatricals). The lighting (Jean-Yves Tessier) is wonderfully varied and imaginative. The sound (Jim Zadai) is crisp. John Vaughn’s direction and choreography are amusing and inventive. The 9-piece band, under the baton of musical director Lyndon Pugeda, with its rousing pop-rock beat, sounds like twice its size.

And the cast is marvelous.

Beets Malone has the perfect no-nonsense mien and belt-‘em chops as fiercely independent Donna Sheridan, who’s built and operated a tavern on a tiny Greek island – by herself, as a single mom.

Her daughter Sophie (Katie Sapper, delightful and compelling throughout), is about to get married —and she wants her father to walk her down the aisle. If she only knew who he was.

When she finds her mother’s diary, she discovers three likely candidaates—and she invites all of them to her wedding. She thinks she’ll be able to recognize her dad on sight, but it doesn’t turn out to be so simple.

So, we have the three paternal contenders, each talented, engaging and endearing: an American (Robert Townsend), an Aussie (Lance Arthur Smith) and a Brit (Jason W. Webb).

As with all jukebox musicals that attempt to wrap some semblance of a story (book by British playwright Catherine Johnson) around a catalogue of already-written songs (by ABBA’s Benny Andersson and Björn Ulvaeus), the plot is silly and implausible.

But the music is so infectious and irresistible, it earns three encores (the last with a drop-down of more than a dozen mirror balls). Some numbers that were especially well created here: “Money, Money, Money,” “Dancin’ Queen,” “Super Trouper” (that a capella opening!), “Lay All Your Love on Me” (with the young men dancing in shortie wetsuits and fins) and the title tune (with the chorus as pop-up puppets).

The show, which ran for 14 years on Broadway, has been seen by more than 60 million people worldwide. (Oh, and there was that embarrassingly mis-cast 2008 movie and its new sequel–with Cher as Grandma. But that’s another story for another day).

Meanwhile, until June 30, we have Moonlight’s “Mamma Mia!,” the opener of its 38th season under the stars. Sure, it’s a big ball of fluff and empty calories, but this production is still a ton of fun.