“THE LONELIEST GIRL IN THE WORLD” at Diversionary Theatre 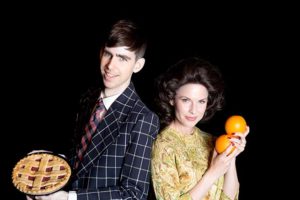 Sometimes, loneliness is self-imposed. Consider Anita Bryant, the centerpiece of the world premiere musical at Diversionary Theatre: “The Loneliest Girl in the World,” composed by Julia Meinwald, with book and lyrics by Gordon Leary.

At the peak of her popularity, the 1950-60s pop singer was voted the most admired woman in America three years in a row by Good Housekeeping magazine.

A devout Christian from Oklahoma, Anita went from Miss Oklahoma to a finalist in the Miss America pageant (she was beaten by Mary Ann Mobley who, played by Lauren King Thompson, taunts her repeatedly — and hilariously —  throughout the show).

Bryant recorded a number of albums and songs, most famously, “Paper Roses.” She scored four top 40 hits in her heyday. Then, her husband, former DJ Bob Green (Steve Gouveia) pushed her into doing commercials, though all she wanted to do was sing. His motives are never really specified; was he just manipulating her for the added income? Was he really on board with her political and religious leanings? (The real Bob Green, who died in 2012, was).

After hawking Coke and other products, she became the high-profile national spokesperson for the Florida Citrus Commission, pitching orange juice for ten years. Her face, voice and motto (“A day without orange juice is like a day without sunshine”) were ubiquitous.

But then, her life took a seriously wrong turn. After an anti-discrimination ordinance was passed in Florida, she morphed into a virulent, Bible-thumping opponent of gay rights. It marked the end of her career. The gay community boycotted orange juice for years. And then, after she got a divorce, the evangelical community that had been so supportive of her extremist views, shunned her.

It’s a terrific story of the rise and fall of an activist. But wait, there’s more. The musical tells an intriguing parallel story of another activist.

Timid, closeted Tommy grows up as a rabid Anita Bryant fan. It takes him a long time to come out, though when he does, his mother (Marci Anne Wuebben) is amazingly sympathetic and supportive. He even finds a boyfriend.

But when he hears Anita’s venomous anti-gay rhetoric, he turns into an ardent gay rights activist — the one who, in 1977, in Des Moines, Iowa, shoves that immortal, politicized pie in Anita’s face—on national TV. (You can actually watch it on youtube).

Thom Higgins, the real pie-pusher, was a lifelong activist who died young (1994). But the musical invents a life, a mother and a coming-out story for Tommy.

The show has a lot to say, but it still feels like a work in progress. While the stories are compelling and multi-layered, the music has a sameness to it, and often sounds self-consciously atonal. Most songs begin melodically, then take a sharp turn into wildly unpredictable, jarring notes. It’s not an easy score to sing, and it’s not always easy on the ear. The harmonies are more intricate than the melodies, and the lyrics are frequently simple, verging on simplistic.

The two main characters should also have more differentiated numbers – perhaps pop and gospel for Anita, rock or more angular tunes for Tommy.

But Diversionary does everything possible to make this show sing. The production is excellent, with two outstanding leads—marvelous Allison Spratt Pearce, beautiful and pitch-perfect as Anita, revealing her to be a relatively sympathetic and definitely multi-dimensional character. Perhaps the show will serve to show how fanatics are born, which may help us understand our shockingly polarized country.

The fact is, Anita brought her loneliness and ostracism on herself – and she never really recanted. The most she could muster was “Live and let live,” but the coda to that seemingly more accepting attitude was: “just don’t flaunt it or try to legalize it.” At age 78, after remarriage and several bankruptcies, she’s back where she began, in Oklahoma, still running her Anita Bryant Ministries International. But none of this is in the show, which begins and ends with the pie-ing.

Appealing New York actor Sam Heldt (Tommy) has been with the musical for several years, since its inception. He has a disarmingly young, ingenuous mien, and makes the character a little nerdy and intense, but wholly likable.

Playing a raft of other characters are four chameleon-like performers. The most varied and flexible are Lauren King Thompson and the endlessly malleable Shaun Tuazon, who just gets better with every performance.

The clever, candy-colored set (Robin Sanford Roberts) is nicely complemented by the lighting (Christina J. Martin), sound (Matt Lescault-Wood) and period-perfect costumes (Elisa Benzoni) and wigs (Peter Herman). Whoever is responsible for those comical cardboard cutouts established a riotous way to change character on a dime.

Director Matt Morrow and musical director Patrick Marion have done a masterful job with this challenging new work. The score needs some re-thinking, but the show has a powerful story to tell.