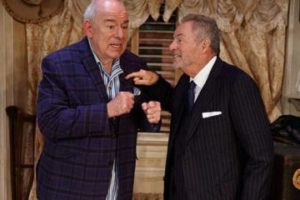 “The Sunshine Boys” has some timeless themes—and some poignant ones:

Partners who work together for decades, but really can’t stand each other. The ravages of time, and being forced to retire before you’re ready.

In Neil Simon’s 1972 comedy, one member of a 43-year vaudevillian duo decided to call it quits. The other was furious. They haven’t spoken in over a decade. Now they’re being asked to come together for one last nostalgic TV hurrah: a retrospective on the history of comedy, which wouldn’t be complete without Lewis and Clark.

Simon can wrap comic gold around situations like this. But some of the other setups in the play, which was made into a movie in 1975, are less funny these days: memory lapses in older people. Senior men hiring and ogling young, blonde, big-breasted women.

At North Coast Repertory Theatre, director Jeffrey B. Moss’ highly competent cast has the comic chops and timing, but only Lenny Wolpe, as the irascible Willie Clark, part of the once-dynamic duo, is the real deal. He’s genuinely hilarious, Yiddish accent and all.

This is New York in the ‘70s, where folks don’t say pa-jeh-mas or Dorrr-is (Doris), where they have a certain specific intonation and sensibility.

James Sutorius, as the other half of the team, was brilliant at North Coast in “The Father,” winning a Craig Noel/San Diego Theatre Critics Circle Award last year. But except in their way over-the-top ‘Doctor’ sketch, he isn’t preternaturally funny. And that was the role for which deadpan funnyman George Burns won the film’s only Academy Award.

The set, lighting, costumes and secondary characters are amusing, though why the same 1925 Al Jolson recording played repeatedly during breaks and intermission is a mystery.

Clearly, this isn’t the most enduring of Simon’s works—that honor might go to “The Odd Couple”— but still, it’s sure to wring a few laughs from you. Neil Simon, who died last year, was, after all, the King of Comedy.