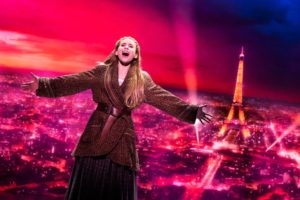 Most people think summer is the time for musicals – warm nights, light fare. But San Diego is a hotbed of musical theater year-round. And this fall offers a veritable cornucopia of musical options.

In fact, in September alone, there are no fewer than nine high-profile musical productions worthy of your early autumnal planning.

At The Old Globe, there’s “Almost Famous,” written by Academy Award-winner and former San Diegan Cameron Crowe. Inspired by his iconic, life-based 2000 film, it’s about an aspiring music journalist who goes on the road in the early ‘70s with an emerging rock band. The new show’s music and lyrics are by Pulitzer- and Tony-winner Tom Kitt.

The La Jolla Playhouse is offering the facetiously titled “Kiss My Aztec,” with book and lyrics co-written by that funny wild-man, John Leguizamo. An irreverent satire of Latinx history, the musical features a fusion of bolero, hip hop, merengue and rap.

Two not-so-new musicals have never, to my recollection, been produced locally before: “American Idiot,” featuring the rocking rhythms of punk legends Green Day, will be presented at the small, plucky OB Playhouse.

And Moonlight Stage Productions brings us “Victor/Victoria,” the stage version of the 1982 film starring Julie Andrews, who reprised her role onstage as a cross-dressing singer in late 19th century Paris.

“Anastasia,” a more recent musical, also based on an earlier film, will debut here thanks to Broadway San Diego. The 2017 show, written by the Tony Award-winning creators of “Ragtime,” adapts and updates the legend of the last Czar’s daughter, who might have escaped the Bolsheviks’ execution of her family.

If you go for the classics, check out the beloved “Man of La Mancha,” the Don Quixote story, at San Diego Musical Theatre. Or, take in the musical version of “The Addams Family” at the Welk Resort Theatre.

If your taste runs more to the classical, you won’t want to miss that master of music and history, “Hershey Felder as Monsieur Chopin” at the San Diego Rep.

Theater is one great way to make the back-to-school season sing.