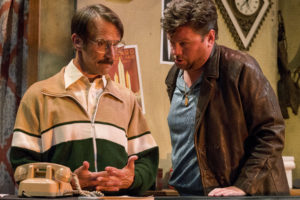 You kind of have to gird your loins for a David Mamet play. In addition to the explosive barrage of profanity and misogyny, and the lame machismo of lunkhead losers, you’re confronted by the underbelly of society at its most desperate and despairing.

“American Buffalo” throws in a low-end, doomed swindle, mis-conceived by petty thieves embodying free enterprise in all its cutthroat splendor. These are would-be capitalists hellbent on getting their slice of the American pie. For them, loyalty and friendship don’t mix well with business and greed.

Mamet’s characters, while rarely likable, are always intriguing, and in the excellent Backyard Renaissance Theatre production, they’re often rather amusing, even if they don’t always intend to be.

Absolutely nothing goes right for these bottom-rung hustlers and their supposedly meticulous plans for a rare-coin heist that includes the titular nickel. Along the way, relationships are frayed and the junk shop, filled to the brim with Chicago’s castoffs, from clocks to carpets to instruments of animal butchery, is demolished by the end.

And young Bobby, a kind of conman-in-training, gets the worst of it, thanks to violent, vitriolic, irrational hothead Teach, marvelously played by Richard Baird, as an empty-pocketed, self-deluded shark who thinks he’s smarter than everyone else. When ruffled, or messed with, or cheated at cards, his credo is: “The only way to treat these people is to kill these people.”

Marcel Ferrin is wonderfully monosyllabic as Donny’s underling and Teach’s punching-bag, Bobby, a possible junkie who may be a bit slow on the uptake, but who has secrets of his own, however ill-conceived.

With detailed set and props, and effective lighting, costumes and sound, the production is deliciously dark and disturbing, played with frightening ferocity and sad comic gusto.