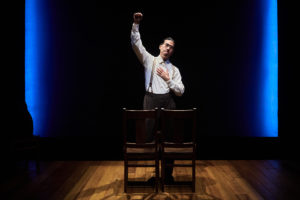 There couldn’t be a better time to see “Hold These Truths.”

The real-life story of a man who believed so strongly in the U.S. Constitution that he was willing to go to prison—more than once—to defend the document and its contents.

Gordon Hirabayashi was only a college student in 1942 when the Japanese bombed Pearl Harbor. He was a nisei (second generation Japanese American) who grew up on a farm in Seattle and was extremely assimilated at the University of Washington. He was a Quaker, a conscientious objector.

But when a curfew was imposed on West coast citizens of Japanese ancestry, he defied it. And when the evacuations of 110,00 West coast Japanese (mostly citizens), and his family was sent off to an internment camp in Tule Lake, CA, he refused to go.

He wrote letters of defiance against Executive Order 9066, signed by President Franklin D. Roosevelt, citing the Bill of Rights and the Declaration of Independence (from which the title of play comes).

He was arrested and put in jail. Later, he served time in an Arizona honor camp and a Washington State federal penitentiary.  His case went all the way to the Supreme Court, and he didn’t get satisfaction until 40 years later.

But his courage and conviction, his persistence and patriotic resistance made him a true American hero. (Shortly after he died, in 2012, at age 93, President Obama posthumously awarded him the nation’s highest civilian honor, the Presidential Medal of Freedom).

When actor Jeanne Sakata, herself a sansei (third generation Japanese American, whose father was in an interment camp as a teen) learned about Gordon Hirabayashi, she was obsessed with his story and determined to meet him.

She spent many hours interviewing him and his friends, and reading his letters. The result, her first play, “Hold These Truths,” created with director Jessica Kubzansky and masterful Korean American actor Ryun Yu, has traveled the country for a dozen years, often with Yu revisiting the role.

It is a particular gift for us to reunite them at the San Diego Repertory Theatre, at this particularly fraught and divisive time in our history.

Once again, race, religion and nationality are being targeted at the highest level of government. Muslims and refugees are being denied entry to the U.S.; ‘Dreamers’ born in this country are at peril of being expelled; black citizens are being gunned down in the streets; border detention camps are holding children in pens. And those who could speak truth to power, who would stand up to the President about abuses of power, are being muzzled, prevented from defending the Constitution and what’s right.

Gordon couldn’t visit us at a better time, to remind us of who we could be as our best, bravest and most principled selves.

Sakata’s play isn’t a history lesson or lecture; it’s a riveting life story. Yu is a wonderfully flexible performer, who morphs into some three dozen characters of different accents, dialects and ethnicities, creating a one-man microcosm of America, with nothing but a bare platform stage, a few chairs, and some background lighting (Ben Zamora) and sound (John Zalewski). He’s spellbinding to watch.

Most important of all, he introduces us to Gordon, whose name should be much better known, a beacon of light in one of the dark passages of our past, a man with wit, intelligence, perseverance, conscience, and apparently, an amazing lack of bitterness and resentment.

Don’t miss the opportunity to spend 90 delightful, memorable minutes in ‘his’ company.