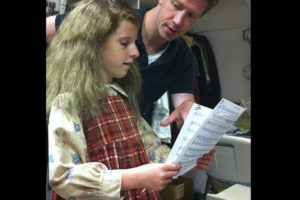 There’s often a kind of no-man’s-land between youth performance companies and professional theater.  After kids graduate or age-out of youth theaters, they may still be too young for full-fledged professional productions.

Actor/singer/director/fight choreographer Jordan Miller is determined to remedy the situation and fill the gap.

He and his wife, actor/singer Jessica Couto, have founded a new, La Mesa-based company, Theater for Young Professionals (TYP).

Miller has been seen on many local stages, most frequently at Lamb’s Players Theatre, where he is manager of the Encore Café, and teaches summer camps for kids.

“Building this from the ground up,” Miller says with a chuckle, “feels like Lambs 45 years ago.”

The seed of the idea was sown during the 2013 Lamb’s production of “Fiddler on the Roof, ” in which Miller played the Russian soldier, Sasha.

“The kids were asking for audition advice, and I started teaching and training,” Miller reports. At the same time (2013-2017), he and his wife had directed productions at CYT (Christian Youth Theatre). Then they thought, “Let’s just make our living doing this full-time on our own.”

The idea has grown into a theater and private arts school dedicated to nurturing the talents and abilities of young performers.

Their target population is 10-17 year olds who are seriously interested in theater as a career – or at least, making it a critical focus of their young lives. For older students, they offer private acting/voice coaching.

They hold several 6-week sessions of classes, each class meeting once a week for two hours ($180 per session, or $30 per class).

No audition is required. The Millers believe “Talent is merely a capacity and will to learn.” They pride themselves on embracing all skill levels and finding the individual means to bring out the artistry in every student.

They cast their shows from their pool of class attendees. TYP’s first effort was a concert version of Jason Robert Brown’s popular teen musical, “13,” at Diversionary Theatre. The Millersy are committed to using professional theater spaces for all performances. The scaled-down concert version of “13” was so well received that they mounted a full production this summer, with a cast of 16, ages 13-18.

“’You shouldn’t pay to perform,’” Miller tells his students. “’You should be paid to perform.’ We treat our kids like professionals. We started out paying them $1 for each performance” (the definition of ‘professional’ vs. amateur is being paid).

“We make the kids kick butt, just like in a conservatory. It’s intensive and rigorous, kind of a mentorship, preparing young people for professional theater.

“I don’t want to make these skills available only to wealthy kids,” Miller asserts. “We determine need on a case-by-case basis.”

Most youth theater companies gravitate toward musicals, according to Miller. He’s moving beyond musicals to straight plays as well, and he’s beginning a Shakespeare class.

Students learn the crafts of acting, performance techniques, improv, mask work, scene analysis, stage combat (the most popular class) and classical and contemporary Broadway singing (both Millers are classical singers; Jessica has a Master’s Degree in Vocal Performance from the University of Wisconsin-Madison; Jordan is an opera singer and graduate of the North Carolina School of the Arts).

“I basically teach at a college level,” says Miller. “How to talk onstage, how to use emotional recall (aka The ‘Method’). We provide a safe space, where teenagers can be themselves. It’s the best way to let them explore their characters.”

The next production, “The Burnt Part Boys,” is a musical that includes both youth and adults. Miller will direct and perform, as one of a quartet of “dead fathers.”

Set in West Virginia in 1962, the 2010 show is an Appalachian coming-of-age story about the two surviving sons of a coal-miner killed in a mine collapse and fire. The mine was subsequently closed, and that part of the mountain was referred to as ‘the burnt part.’ Now, to the surprise of the boys, the mine is being re-opened, and the older one, age 18, has decided to follow in his father’s footsteps. The younger one has other, darker plans. The music, says Miller, has “a country and bluegrass flavor.”

“The Burnt Part Boys” will run from November 23-December 1, at Moxie Theatre near SDSU.

In the meantime, a new Fall session begins at the end of August. There will be Intensive classes in: Shakespeare, Directing, Scene Writing, and Music Theory & Sight Reading.