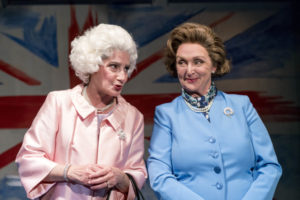 There are still many U.S. citizens who cannot conceive of a woman at the helm of the country.

But there was a time in the U.K. (1979-1990) when there were two females at the top: Queen Elizabeth II and Prime Minister Margaret Thatcher.

They were, in many ways, antithetical: in temperament, background, personality and politics. It was rumored that the two women, born six months apart, had a contentious relationship.

As with every one of her PMs, the Queen met with Mrs. Thatcher once a week. There were no observers or recordings of those meetings.

The possibilities for conjecture were too deliciously irresistible for English playwright Moira Buffini (creator of the marvelous “Gabriel,” seen earlier this year at North Coast Repertory Theatre; and co-creator of the Hulu Series, “Harlots”). She just had to speculate on how those teatime encounters might have gone.

So she came up with “Handbagged,” riffing on a term coined (and added to the OED, the esteemed Oxford English Dictionary), in reference to Mrs. Thatcher’s ruthless verbal attacks, which might as well have been made with her ubiquitous fashion accessory. The Queen also always carried such a purse. As Bette Midler used to jape: ‘What does she have in there: bus fare?’

Buffini’s play premiered at the Tricycle Theatre in London in 2013, transferring to the West End the next year, winning an Olivier Award (equivalent to a Tony) and then touring the UK in 2015. It finally premiered in the U.S. in 2018, with updates and revisions to accommodate American sensibilities and current political climate, opening first in Washington, D.C., and this past January, Off Broadway.

Moxie Theatre has snagged the West coast premiere, a major coup for the indomitable woman-centered company. And they have done the piece proud.

The piece has a quirky, comical structure, placing not just the Queen and The Iron Lady (also known as Attila the Hen) onstage at the same time, but also their younger selves. Each pair spars with her political opponent, but also contradicts her alter ego, underscoring the mutability of memory.

Set in a theater, the play employs two actors to fill in all the other characters in the women’s lives, both personal and political. The two men, wonderfully droll Max Macke and Durwood Murray, argue as well—over which roles they’re playing or should be playing.

It’s all rather meta-theatrical. One of my favorite lines is: “Everything must stay between these three walls,” a reference to how often they break the theater’s fourth wall. When they discuss whether or not there should be an interval (Britspeak for intermission), the Queen quips, “Sometimes it’s the best part of the play.”

You don’t have to know a lot of British history, though you’ll get a bellyful of it (the play does get a tad didactic at times, though the Queen tries her best to hurry those parts up). But it’s leavened with many comic elements, including sly, and not-so-subtle, references to American politics (“Make Britain Great Again,” for example; and, in a discussion of the abuse of democracy in an African nation, someone exclaims, ‘That could never happen in America,’ to an audible audience response).

Macke’s superb Ronald Reagan is a hoot, and Murray matches him with a ruffled, adoring Nancy. All the others, in a wide range of accents and dialects (special kudos to dialect coach Vanessa Dinning) seem excellent, too; we could tell just how accurate the impressions were if we were more familiar with the originals. You can’t beat Mackey, as Thatcher’s high-voiced puppydog husband, Dennis, trailing her and calling her ‘Boss.’

The design elements are simple; a large Union Jack backs a basic white table and chairs, but who sits and who stands becomes a power play of its own. Whose purse is larger? Whose gloves are whiter? Who has a double vs. a single strand of pearls? Is it all code? You decide for yourself.

But whatever you do, don’t miss this battle of the battleaxes. Too bad Thatcher never lived to see it (she died in 2013). Then again, she just might’ve handbagged Buffini.