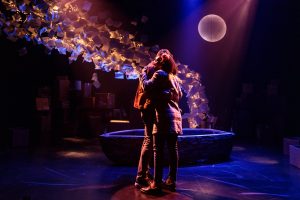 The joy and pain of love: its rapturous beginning and its heartbreaking end.

True love is all-consuming, just like devotion to an artform; both require complete commitment.  Are they compatible? Only if you’re lucky—and equally committed and attentive to both. It isn’t easy.

The real-life evolution and dissolution of the marriage of brilliant, Tony Award-winning composer/lyricist Jason Robert Brown inspired him to write “The Last Five Years” in 2001. His ex-wife wasn’t enamored; a lawsuit and counter-suit ensued. After some judicious changes to the sung-through one act chamber musical, it went on to a 2002 Off Broadway production that garnered a Drama Desk Award for Outstanding Music and Lyrics.

The intriguing show has a tricky structure. The protagonists each sing their side of the story in reverse order: Cathy, the struggling actor, starts at the end, reading a ‘Dear John’ departure note and singing an aching ballad, “I’m Still Hurting.”

Jamie, a budding novelist, begins at the beginning, when he’s excited to defy his Jewish heritage and make his grandfather roll over in his grave, by falling head over heels for a “Shiksa Goddess.”

As Jamie goes on to fame as a celebrated writer, he becomes increasingly narcissistic. Cathy will continue to have soul-crushing auditions, and Jamie will blame her for not trying hard enough. In his crueler moments, he’ll say, “I will not lose because you can’t win.” He expects her to always be there for him, but he can’t seem to be there for her, though he insists that he’s supportive. She stops going to his events. Compromise is no longer on the table.

As written, the two characters never interact, except in one central scene, when they giddily get engaged and say ‘I do.’ The piece can be static and distancing, however ingeniously devised and constructed.

But not with Rob Lutfy, one of San Diego’s most astute and visionary directors, at the helm. And not with his imaginative creative team at Cygnet Theatre.

Their production is highly dynamic and unswervingly engaging.

Scenic designer Justin Humphres adorns the stage with a descending tornado of papers and a scattering of cartons, some lit from within (expert lighting by Anne E. McMills).

Each in their own world, in their own head, the performers pull or replace meaningful objects from one seminal lighted box, sometimes at the same time.

Assistant director/choreographer Michael Mizerany gives them inventive movement, cunningly shadowing or reacting to each other, or punctuating their own lyrics.

Music director/orchestrator/pianist Patrick Marion leads a stellar, unseen string ensemble. Those two cellos are crucial to Brown’s compositions and to the mournful tone of many of the songs. But there is also plenty of humor, excellently handled by both actors, who are adept at conveying a full spectrum of emotion.

New York-based Racquel Williams, a newcomer to San Diego, has a lovely look and a compelling stage presence.

Michael Louis Cusimano, who has become San Diego’s go-to musical theater male ingénue, just gets better with each role (evolving delightfully from “Once” at Lamb’s to “Girlfriend” at Diversionary, to this). He is a supple, athletic mover, a genuine triple-threat (quadruple, actually, since he’s played guitar onstage in the two aforementioned productions).

They’re wonderful together, whether  in a boat (a not wholly necessary but nonetheless pleasant surprise dropped down from above), a car, circling each other or at opposite sides of the stage.

If you’ve seen this unique musical before, you’ve never seen it with the depth and nuance this production teases from it.

If you haven’t experienced it, you’ll appreciate Brown’s lively mix of pop, jazz, rock and folk music, and his clever and poignant lyrics.

Either way, you’ll undoubtedly find something to connect to in your own relationships, good or bad, past or present.