“THE SERVANT OF TWO MASTERS” at New Village Arts 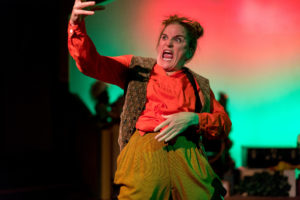 The premise demands a bit of the frenetic. “The Servant of Two Masters” says it all. One man, trying to minister to the needs of two patrons, both staying in the same inn, traveling with identical suitcases, awaiting an important letter that will seal their nuptial machinations.

And you can imagine the rest: a bucketload of puns, pratfalls, slapstick, audience interaction, women playing men, men playing women and a woman playing a woman disguised as a man. All in the name of love. Or comedy.

The original play, written by Carlo Goldoni in 1746, was created in the style of commedia dell’arte, a hugely popular improvisational theater form that featured stock characters, romantic intrigue and topical allusions.

The farcical comedy simply can’t be done without a powerhouse at its center.

New Village Arts has called upon one of San Diego’s most high-powered, high-energy comedic actors, Samantha Ginn, to play the wily servant.

After director AJ Knox translated the play from the original Italian, he and Ginn collaborated on a wacky, off-the-wall adaptation that references everything from Monty Python to the Marx Brothers, TV shows and ads, movie stars and musicians, in a madcap mishmash of inanity and insanity. Even Goldoni himself pops up to have his say.

Knox amassed a cast with wide-ranging talent: clowning, juggling, pantomime, physical comedy, stage combat and yoga, most shouting to be heard as they make all manner of mayhem. He has encouraged them to improvise whenever they like, so the company brags that no two performances are exactly the same. But they’re all undoubtedly equally frenzied.

Ginn is a motor-mouthed whirlwind, an antic-frantic conniver and flimflammer named Truffaldino Gelato. All the original Italian names are given culinary updates, like Pantalone Calzone and Silvio Pepperoncini. Toss into the zany mix: strong women, foppish men, self-satisfied self-reference and outrageous over-the-topness.

It’s all kind of dizzying and relentless, with nary a moment of gag-free quiescence. The stage and characters look great, and everyone seems to be having a heckuva time. But it wouldn’t hurt to pull back a bit. Both audience and actors could use a moment to take a breath.