“GEOGRAPHY OF A HORSE DREAMER” at Casual Company 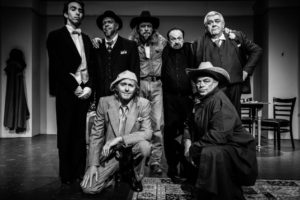 The late, much-admired actor/writer/director spent his playwriting life debunking the myths of the Old West – and creating a mythos of his own.

“Geography of a Horse Dreamer,” a brief early play, was written during the years Shepard spent in London (1971-1974), when he was dreaming of his own “lost” geography, the Good Old U.S. of A. —  warts and all.

The central character, Cody (un-coincidentally named à la Buffalo Bill) is holed up in a sleazy hotel, tied, spread-eagle, to a bed. It’s not clear exactly where he is (he’s blindfolded, and the windows are blacked out), but he yearns for his Wyoming sheep ranch.

Cody has a gift, a peculiar form of prescience or precognition that allows him, in his dreams, to predict the outcome of horse races. He’s been kidnapped by a group of gangsters who are exploiting his clairvoyant skill for their own profit.

This serves as metaphor for the artist (playwright, poet, painter) being bought and packaged for commercial purposes. The danger of messing with creative imagination and inspiration is clear.

Act I of the fast-paced one-hour play is titled “The Slump.” Cody had a great winning streak and made tons of money for his captors, but now he’s on the skids.

When, in Act II (“The Hump”), the boss-man, Fingers, downgrades him from horses to dogs (racing greyhounds) and insists on positive results, Cody is able to deliver, though unreliably. But he turns into something of a mad dog himself.

As is often the case in a Shepard play, violence ensues.  Here, it’s the cowboys vs. the crooks, a deadly assertion of Old West values. Like the West itself, Cody’s ability has been used and abused for economic purposes.

In the midst of all the physical force and psychological torture, the geography of a Shepard play is always studded with poetic language, and this little rarely-seen gem is certainly no exception, with its lyrical descriptions, stunning imagery and surreal elements.

Something makes this particular production of “Horse Dreamer,” by The Casual Company, somewhat mythical in its own right. Twenty-seven years ago, three members of the seven-person cast performed the same play together in downtown San Diego.

To Joe Powers, who formed the company and directs the play, the repeat collaboration is “magical.” These characters, he acknowledges,  make more sense as older men. They’re typical Shepard losers who are lost, trying to reclaim something they may never have had to begin with.

The returning collaborators are: Powers, who gives a stellar, wild-man performance as Cody; Ron Choularton, compelling as Beaujo, the thug-with-a-heart (loved his pool practice on the floor, with three balls ringed by a lariat); and Bobby Larson, long missing (and missed) from local stages, forceful and commanding as Fingers.

Added to this mix are Navarre Perry, menacing and blithely terrifying as The Doctor, who has a nefarious plan for appropriating Cody’s creative genius; Walter Murray, convincing as the cruel mobster strongman; Robert Ramirez as The Waiter; and Bill Barstad as Cody’s brother (a conflation of the two brothers in the text), who swaggers in, Stetson, spurs and all, for the deus ex machina ending.

It’s a very satisfying production (except for that extra-long inter-act scene change, to convert a cheesy hotel into a supposedly posh one).  A few times, the speed of speech affected comprehension.

But those are minor quibbles. Coupled with strong performances, it’s the language, the metaphors, the intensity and sheer, nail-biting drama that carry the day.

NOTE: As part of the company’s month-long tribute to the late prolific playwright (1943-2017), they’ve been burrowing “Deep into Shepard Territory.” They have presented staged readings of several of the best-known works: “Fool for Love,” the Pulitzer Prize-winning “Buried Child,” and the final one, 4/22, “True West.”

Also, after each performance of “Geography of a Horse Dreamer,” the cast comes back onstage and several actors read potent, pertinent excerpts from other Shepard plays. This makes for a short, excellent coda.