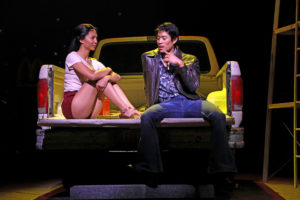 Vietnam was a sore spot in American history. “Vietgone” was a bright spot in theater creativity.

Now, along comes its sequel, “Poor Yella Rednecks,” having its world premiere at South Coast Repertory in Costa Mesa.

Once again, the playwright (actually Qui Nguyen, but onstage, an actorly stand-in for him) introduces the piece and promises that these characters are all completely fictional. But then he goes on to admit that the narrative we’re about to witness is based on the lifestory of his parents.

“Vietgone” (which premiered at South Coast Rep in 2015, became a nationally-produced megahit, and got a marvelous production here at the San Diego Rep in 2018) was about how Nguyen’s  parents met at a refugee camp in Arkansas, after fleeing their homeland during the fall of Saigon. That tale was told from the father’s perspective. The new play is from the mother’s. Both are based on extensive interviews Nguyen had with his folks.

At the end of “Vietgone,” the Playwright is interviewing his aging father, providing the most poignant moment of the story. At the beginning of “Yella Rednecks,” six years later, he’s interviewing his 70 year-old mother, who wants no part of his whole playwriting plan.

“That a terrible story,” she says, setting up the comic tone of the piece, and soon airing the table-turning conceit used in both plays: the white Americans are the ones who speak in halting, broken phrases. The Vietnamese characters all speak very smooth, colloquial English, larded with F-bombs.

His mom, Tong, thinks the whole venture is a bad idea (“Only white people go see play”). She’s the one who insisted on the white people sounding uncomfortable and inadequate with communication.

From there, the story takes off with the same high energy as the first play, with rap songs, martial arts, hip hop moves (no ninja this time).

But this is a much darker tale, and the comedic tone doesn’t work as well. The incessant swearing gets tiresome. And the rap songs are more plentiful, not necessarily a good thing. This time, they function more in the vein of traditional musical theater: they further plot or character development. But the lyrics aren’t clever or sharp enough, not laced with the witty wordplay and internal rhymes of the best rap numbers.

This is more of a story of a relationship fraying under the stress of the immigrant experience, in a tiny rural town called El Dorado, Arkansas where, needless to say, there are few Asians, immigrants or Vietnamese. Their young son, Little Man, is getting bullied and ridiculed at school.

Quang (Tim Chiou) and Tong (Maureen Sebastian) have low-end jobs from which they alternate getting laid off. Money is tight, and Tong’s foul-mouthed mother (Samantha Quan) lives with them. Little Man , (a wonderful, life-sized puppet, deftly manipulated by Paco Tolson and Eugene Young, who provides the boy’s voice) spends most of his time with his grandmother, so he barely knows English, which leads another source of trouble at school – with the teachers.

Tensions rise between Tong and Quang, whose friend (the talented, acrobatic Young again) keeps urging him to move to Texas. The situation comes to a head, and the outcome is far from clear for a while.

This heartrending story is strong enough to stand on its own, without all the extras (the songs, the dances). What was unique and irresistible in the first play feels overdone and unnecessary in the second.

The cast is marvelous; all but Young are returnees from the original cast, which gives delightful continuity to the journey of this family. They shouldn’t be asked to dance, though.

Tolson plays at least six roles (most of them gnarly white people).  Everyone doubles up (or more), except for Sebastian, who’s sexy and smart (and smartass) as strong, independent Tong; she also exhibits some killer martial arts moves. Quan makes the biggest transition, from stooped grandma to seductive Texas hottie. I was seriously surprised at the end, when only five people came out for a curtain call. It seemed like a much larger cast; they all metamorphosed so expertly.

May Adrales also returns as director, and she handles the job with aplomb; she has a good sense of Nguyen’s singular, imaginative style.

The set (Arnulfo Maldonado) is stark and symbolic; the lighting (Lap Chi Chu) and projections (Jared Mezzocchi) are evocative. Shane Rettig has once again created original music, and the sound design. The title song comes at the end, followed by an exhortation (to Vietnamese? To all immigrants?) to “climb mountains while the rest of them are sleepin’.”

Nguyen knocked it out of the park on “Vietgone.” He needs to round a few more bases on “Poor Yella Rednecks.”