“LIFE AFTER” at The Old Globe 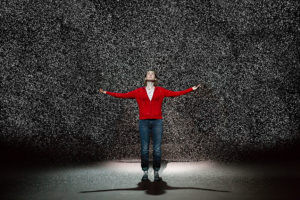 Alice Carter just lost her famous father, Frank, a nationally –known motivational speaker who died in a car crash shortly after they had an argument on her 16th birthday.

She thinks it’s all her fault, but there are aspects of that snowy Canadian night that just don’t hang together. All she wants to find is the truth.

“Life After,” a 2017 chamber musical with book and score by Britta Johnson, is seen through Alice’s eyes, mind and memory. We hear all the voices in her head, including a trio of badgering Harpies, and meet the people those voices belong to:  Alice’s father, mother, sister, best friend and favorite teacher.

In this American premiere at The Old Globe, everybody keeps telling Alice “Control what you can; let go all the rest,” a dictum that comes from Frank’s book – which Alice has never read. There’s also a strong message about forgiveness.

Alice can’t stop chewing over the events that preceded her dad’s death, and that lends a bit of repetitiveness to the 90-minute musical.

But everything about The Globe production is stirring and simply gorgeous – from the stark set with movable three-dimensional screens and evocative environmental projections, to the stunning lighting and magical snowfall.

It might sound dark, but there’s comic relief in Alice’s nerdy BFF, and in a spoofy re-creation of Frank’s “TransforMotion” conference presentation. After its Toronto debut, the show won Dora Mavor Moore Awards for Outstanding New Musical and Outstanding Production.

The Globe is offering a pretty outstanding production, too. The 9-member cast is uniformly superb, anchored by Sophie Hearn’s wonderful, angst-ridden performance as Alice and affable Bradley Dean as her charismatic father.

The singing is strong and the arrangements are inspired, backed by a lush-sounding, string-heavy 6-piece orchestra.

The script may be a tad heavy-handed in its messaging, but Barry Edelstein directs with a light and sensitive touch. We sense the Canada-cold outside, but the look and feel of the show are warmly inviting and amiably irresistible.