“ALL IN THE TIMING” at North Coast Repertory Theatre 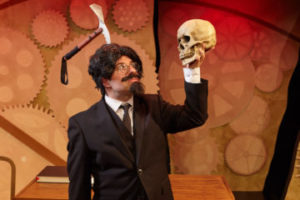 In theater, it’s said that “Timing is everything.” Or, as acclaimed playwright David Ives put it in his title, it’s “All in the Timing.”

In the late 1980s, Ives began to create a series of playlets that go together as a sextet, enacted by a sextet of actors. Not only hair-trigger timing is required of these pieces; but also extreme physical and verbal agility.

“All in the Timing” is drunk on wit, wordplay and linguistic legerdemain. One scene is spoken in an invented language, a supposed new universal tongue called Unamunda. The phrases are based on hilarious language-mangling. For instance, “Squeegee” means ‘excuse me.’ “Nintendo” means ‘listen’ and “Sonia Braga” is ‘Brava.’

David McBean, in nerdy getup, is superb in conveying the intricacies to his first willing pupil – played by Taylor Renee Henderson — who catches on quickly and hopes this new mode of communication will decrease her stutter and isolation. She gets more than she bargained for… in a sweet Unamunda manner.

We witness a meet-cute that goes horribly wrong, but the two are afforded multiple do-overs to get it right. There’s a hilarious opera about minimalist composer Philip Glass buying bread, the mundane elevated to wacky, harmonic high art.

And we see how, to test a scientific hypothesis, three monkeys locked in a room with typewriters could maybe come up with “Hamlet.”

The death of Russian revolutionary Leon Trotsky is uproariously re-eneacted by Omri Schein, with a heavy beard, mustache, accent and climber’s axe lodged in his head. Uma Incrocci is delectably nonchalant as Mrs. Trotsky, and McBean scores again as the lisping Spanish assassin.

Noelle Marion brings her marvelously malleable face to the comic mix, and Christian Pedersen shines as a clueless date – twice over.

Whether you like base-humor belly laughs or intellectual titillation, “All in the Timing” delivers the goods – in side-splitting spades.