“HEDWIG AND THE ANGRY INCH” at Diversionary Theatre 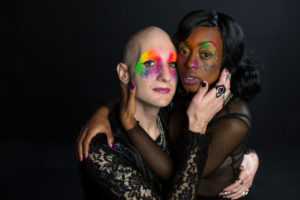 Poor Hedwig. Born Hansel in East Berlin, a city, like himself, split in two, he was abandoned by his American G.I. father and neglected by his Hitler-loving Teutonic mother. An American soldier promised him a new life – if he’d put on a wig and become a wife.

So, he left something of himself behind, and the botched surgery also left a little something -– the so-called angry inch, that later became the name of the rocker’s backup band. It’s also, of course, part of the title of the award-winning musical, “Hedwig and the Angry Inch,” with book by John Comeron Mitchell, based on some of his own life story, and music and lyrics by Stephen Trask.

Hedwig’s home is on the road now, an escape from the trailer park in Kansas, where her sergeant left her behind. She’s married to Yitzak, an angry, Jewish, bearded woman in drag, whom Hedwig mistreats mercilessly. The duo spend their time in gay dive-bars — like Diversionary Theatre, which is the perfect venue for the 20th anniversary legacy production of the show.

Diversionary artistic director Matt  Morrow has, as usual, cast expertly and directed with creativity, finesse and sensitivity – and a big dollop of humor.

Some productions of this musical are overly campy or satirical. But this telling feels so real, expressed directly from the soul of a bifurcated, conflicted person trying to find place in the world.

The masterful acting, directing and singing contribute mightily, with the special addition of a non-binary actor playing Hedwig.

Jeremy Wilson is superb, exhibiting a well of comic agility and a deep sense of loss and inner fragility – along with the requisite flamboyance and outrageousness – that combine to make the piece so real and rewarding.

Having Cashae Monya as your sidekick is no small advantage. She’s extraordinary as Yitzhak, and her powerhouse vocals add a great deal to the mix.

The band is a knockout, their wild wigs an inspired addition. The set, lighting, sound, costumes and projections enhance the sad story and riotous, rockin’ songs.

But it’s the beautifully rendered ballads that provide the heart, and express the underlying message of love and acceptance – of self and others.