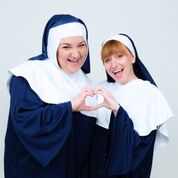 You’ve got your brotherhood of gangsters and your sisterhood of nuns. And a bevy of characters straight out of central casting: the gun-shy cop and the hard-nosed Mother Superior. The jocular Monsignor and the repressed novitiate who yearns for excitement.

“Sister Act” is kind of silly, and it doesn’t run deep, but it’s very entertaining. You just have to suspend all your disbelief… which is kind of funny in a show set mostly in a convent.

The 1992 comic movie starred Whoopi Goldberg, who produced the 2009 musical version. The show has a rousing, upbeat score by the prolific Alan Menken, with often hilarious lyrics, by Glenn Slater.

Bill and Cheri Steinkellner wrote the book, about an aspiring singer who sees her married mobster boyfriend kill a suspected stoolpigeon, and has to go into hiding to save her skin.

The soft-hearted cop, who had a crush on her in high school, suggests the most unlikely safe-space: a convent.

Deloris clashes with the Mother Superior, but the sisters love her sassy way, and the disco beat she brings to the choir. The glitzy, energized singing saves the failing church, the cop gets the girl… And well, I won’t tell you more. You’ll have to see “Sister Act” at San Diego Musical Theatre.

The acting and singing are really strong, but on opening night, they would have been even stronger if there weren’t mic problems, and a sound balance that had the orchestra overpowering the performers. Many of the most clever lyrics were impossible to decipher.

The set is odd, with geometric panels rising and falling seemingly at random. And some of the costumes, while attractive in a ‘70s way, are somewhat less than flattering.

But it’s easy to overlook all this in the face of the unceasing humor and ebullience of the production. Larry Raben’s direction and Luke Harvey Jacobs’ choreography are fast-paced and high-energy.

Humor and roof-raising song go a long way toward making life – in or out of a convent – a lot more fun.