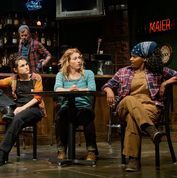 The American Dream is slipping away. Once upon a time, folks believed that if you worked hard, you’d earn a comfortable, middle-class life. But the middle class is eroding, and nowhere is that more evident than Reading, Pennsylvania.

In 2011, the year that city was named the poorest in the country, playwright Lynn Nottage started making trips there from New York, interviewing residents to chronicle what she called “the de-industrialization of America.”

Her 2½ years of interviews led to “Sweat,” which earned Nottage her second Pulitzer Prize.

The drama is set in two seminal timeframes: 2000, when almost everyone is working at the mill, and keeping their heads above water; and 2008, when the bottom fell out and the mills closed down.

A cohort of close-knit friends meets regularly at the neighborhood bar. Over time, we watch three birthday celebrations, and lots of teasing and playfulness.

But when two of the women – one white, one black – go up for the same management job, friendships unravel and underlying issues of race, class, gender, loyalty and addiction come bubbling to the surface. It won’t end well for anyone. And in reality, things haven’t gotten better in Reading, which as of 2016, still has a 40% poverty rate.

The cast of nine is outstanding. Every character gets a gut-wrenching monologue describing their life and frustrations. Those are high points of the evening, stories of a lifetime and three generations in the mill. The only weakness in an otherwise near-perfect production is the projections, of economic news and weather conditions, which are more distracting than helpful.

Actors at the very top of their game include Judy Bauerlein, Monique Gaffney, Steve Froelich, Matt Orduña and Jason Heil, who stepped into his role just 1½ weeks before opening due to an actor injury.

We get to know these people, and feel their despair. It’s a sobering reminder of how the other half lives.