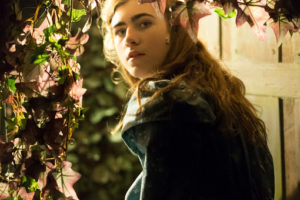 There’s an adage in the theater that you never want to see a show the day after opening. The cast puts out 200% on that night, and parties afterward, so they’re not always in top form the next day.

Perhaps that accounts for the tamped-down feeling of “The Secret Garden” at New Village Arts. And the fact that almost everyone seemed to be straining to reach above their vocal range.

Everyone, that is, except the robust-voiced Samantha Rose Steinberg and Samantha Vesco. Steinberg, with her crystalline soprano, plays Lily, the ghostly aunt of young Mary Lennox, who’s forced to leave colonial India after everyone she knows dies of cholera.

When she arrives at her uncle’s gloomy Misselthwaite Manor, it’s Vesco’s hearty chambermaid, Martha, who helps her “Hold On.”

The beloved Frances Hodgson Burnett children’s novel is the source material for the 1991 musical, with a book by Marsha Norman and a lush, romantic score by Lucy Simon. Music swirls around the action – but so does a bevy of ghosts, who appear in nearly every scene, repetitively circling the stage and hovering over the dramatic proceedings.

Rosina Reynolds, a native Brit and formidable director, has focused attention on the Yorkshire accents, which are so thick, at times they’re unintelligible.

There’s a binary tone in this piece: the dreary manor, where both humpbacked Archie and his doctor-brother, Neville, still mourn the loss of Lily, whom they both adored.

And there’s the magic of Dickon, who talks to birds, conjures spirits and can make anything grow – including Sarah Mahaffey’s Mary Lennox, who arrives as a spoiled, sour brat and ends up transforming the household, and bringing both her aunt’s garden and her young cousin, Colin, back to life.

The most stirring moments are the reunion of Jacob Farry’s Colin and David Humphrey’s Archie, and the heart-rending duet of Archie and Lily at the end.

With lovely costumes and lighting, and a strong band, and given time for the cast to rest their voices, relax into their roles, and take some joy in their interactions, this will likely settle into a fine, solid production.