“FESTIVAL OF CHRISTMAS: NORTH OF NORMAL” at Lamb’s Players Christmas 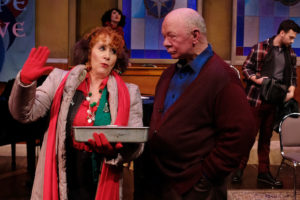 Somewhere in the 40th annual Festival of Christmas at Lamb’s Players Theatre, there’s a story. Something about a church in North Dakota being in arrears. Several religious groups and an aggressive real estate developer want to take it over. But the long-time caretaker promised his wife of 60 years that he’d leave it in good hands.

But really, what should attract you – and enthrall you – is the singing, the vocal arrangements and the versatile musicianship, which are all stupendous.

The very talented musical director, Jon Lorenz, has created or co-created stunning arrangements of familiar and lesser-known Christmas songs – some of them sung a capella, with gorgeous harmonies. He even wrote the words and music to two songs.

The knockout, heart-stopping first act finsih, “Mary Did You Know,” is alone worth the price of admission.

Several of the nine cast members play piano and/or guitar (acoustic and/or electric). There isn’t much dancing or movement, but the audience will be moved by the heavenly harmonies.

Gerber’s loopy ebullience as Mrs. Swanson serves as a counterbalance to Jim Chovick’s melancholy Ole, a man steeped in memory, painfully aware of his aging body and the deterioration of his wife’s mental faculties.

Lorenz, who had just stepped into the role of the supposed Bad Guy developer on the night I was there, did an excellent job, and gleefully employed a series of humorous song snippets to convey his flirtatious feelings.

But what you’ll walk away remembering is the glorious melodies, gorgeously rendered, in a genre range from traditional to gospel. If that doesn’t send you out in the holiday spirit, nothing will.