“SPAMILTON” at the Kirk Douglas Theatre in Los Angeles 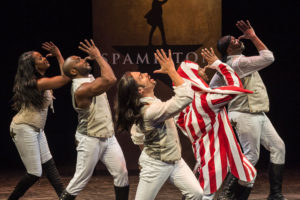 If you’ve been lucky enough to see the musical theater phenomenon of our age – Lin-Manuel Miranda’s “Hamilton” – or if you know the score from the terrific cast recording… don’t rap, don’t belt, just hip hop up to L.A. to see the uproarious spoof, “Spamilton.”

Creator/writer/director Gerard Alessandrini is a word-wizard, just like Miranda and his idol, Stephen Sondheim, who gets more than a few lines and jabs in the show. Alessandrini has been sending up musical theater since 1982, when he began his deliciously satiric franchise, “Forbidden Broadway.”

Now, in collaboration with a superb chorographer, design team and musical director, he makes every one of these 80 minutes look and sound and move exactly like “Hamilton.”  But instead of telling the story of the Founding Father, he’s relating the career path of Miranda, the brilliant Puerto Rican rhyme-meister who, riffing on one of “Hamilton’s most famous songs, “I am not throwing away my shot,” vows, “I am not gonna let Broadway rot.”

Miranda, it’s well-known, has an encyclopedic knowledge of Broadway musicals – and Alessandrini can match him bar for bar. Both squeeze innumerable words and voluminous wink-nudge theater references into their work.

“Spamilton” also manages to bring out a few Broadway stars – who have nothing whatsoever to do with “Halmilton,” but the mega-talented cast of nine can do outrageous impressions – including Audra McDonald and Brian Stokes Mitchell, Glenn Close and Liza Minelli doing her mother, Judy Garland, which really doesn’t belong here at all.

Neither does the Obamas at bedtime at the start of the show for an unnecessary setup. But a faux Barbra Streisand is very funny at the end, pleading to be “in the film when it happens.”

Everything Broadway and rap and “Hamilton” and the kitchen sink finds its way into this unparalleled parody.

If you love “Hamilton” – and who on earth doesn’t? – you’re sure to double over from this heavy but hilarious dose of Ham and Spam.