“SUMMER, THE DONNA SUMMER MUSICAL” at the La Jolla Playhouse 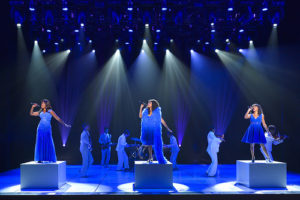 You’ll hear all the signature, sexy songs of The Disco Queen (she hated that pigeon-holing moniker): “Love to Love You Baby,” Bad Girls,” “Hot Stuff,” “She Works Hard for the Money,” and 20 more).

But, like many world premiere musicals, it needs a lot of work.

The show is both overdone and underdone.

Director Des McAnuff, former artistic director of the La Jolla Playhouse, loves to make use of every technological trick in the book. The multiple mirror balls are de rigueur on this subject and era. But the huge banks of lights, and columns of lights (Howell Binkley) and never-ending projections (Sean Nieuwenhuis) – mostly squares of images and fragmented images – seem to be ADD-driven, and create sensory overload in the audience.

‘Fragments’ is a through-line of the story. The mature Diva Donna (the fabulous, Tony Award-winning La Chanze, who pretty much owns the show) is doing her final concert, which makes us certain, from the outset, that “The Last Dance” will be the last song.

She’s looking back on her life. A pretty common framing device, but it sort of works, as two other Donna incarnations (petite, big-but-shrill-voiced Strom Lever as Duckling Donna and Ariana DeBose, a most amazing dancer, late of “Hamilton” on Broadway) act out certain scenes from her past.

This tripartite portrait dramatizes her early admission that “I never see the whole picture, just fragments.”

To underscore the point, there are projections of her eye or her mouth. Only in the final moments does her entire face come into view at last.

While the other two Donnas do just fine in enacting events from her life, Diva Donna keeps popping up to comment or sing, rising from the trap below. She describes her life as a roller-coaster, but in this show, it’s more like an elevator.

Which brings us to the book (written by Colman Domingo, Robert Cary and McAnuff). It’s Bio-pic Lite: a few scenelets that give a cursory glimpse of her experiences, but no depth of insight or character. The other people in her life are ciphers. Donna is said to have broken down barriers, battled prejudice, but we get none of that.

We see her physically abusive first husband, an early intimation of sexual abuse (in her church), and her long-term Nice Guy second husband. From this telling, it seems like she had a wonderful marriage, three devoted daughters and a stable homelife; that seems like  less suffering than most rockstars endure.

She does mention her reliance on “little blue pills” (are those meant to be represented in her outfits? All three Donnas wear blue almost throughout the 110-minute intermissionless show — which is, it should be noted, a pretty long sitting-time.

In view of the brevity and superficiality of most scenes, her contretemps with the gay community is given quite a bit of stage time. And yet it, too, feels glossed over.

As the show has it, she said that “God created Adam and Eve, not Adam and Steve.” Her gay friend upbraids her for using a trite utterance she didn’t even make up, then accepts her profuse apology.

The real story is that she was a born-again Christian by the mid ‘80s, just when the AIDS crisis was ramping up. The club scene that she dominated was heavily populated by gay men. She reportedly said that AIDS was a punishment from God for the immoral lifestyles of homosexuals. As a result, she became the target of a boycott, which put a dent in her career at the time. It wasn’t until 1989 that she came forward to say the whole controversy was “a terrible misunderstanding.”

Despite the setback, she kept recording, even getting #1 hits, through 2010. She died at age 63 in 2012, of lung cancer, though she was a non-smoker. The ‘illness’ that brought her down is never identified in the musical.

Given the fact that she describes the “utopia of the club scene” as a “world of androgyny,” one of the most interesting directorial choices in the show is to have most of the males played by females, providing a very androgynous look to the chorus. It’s kind of thrilling, and gives the show the edge it otherwise lacks.

There’s no denying that “Summer” is entertaining. The music is energetic and some of those songs are unforgettable. The show is clearly designed to be a crowd-pleaser. The costumes (Paul Tazewell) have all the glitz, glitter and glam you could want. The sound (Gareth Owen) is crisp. The singing and dancing are strong.

But the sum total is much more like a concert than a book musical. And we don’t come away knowing all that much about the real Donna Summer.

What we get, as she warned at the beginning, is fragments.