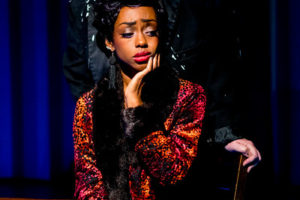 Past productions of the classic musical, “Cabaret,” have always been a chilling reminder of the waning days of the decadent, pre-Fascist Weimar Republic.

He has the young ‘’secondary’ Emcee don a red baseball cap, like the ones we’ve seen so much of in the past year. Anachronistic, yes. But also frighteningly pointed. And when the budding writer, Cliff, tells Sally Bowles, the head-in-the-sand libertine, “The party’s over,” it sends a shiver down our collective spine.

Written by the incomparable team of composer John Kander and the late lyricist Fred Ebb, with a book by Joe Masteroff, “Cabaret” has always played out on two levels simultaneously. In ion’s intimate space, there are even some cabaret tables down front, as there were in the acclaimed New York revival.

The cabaret acts are commentaries on the story, which is based on the semi-autobiographical work of Christopher Isherwood: A callow American writer arrives in Berlin in 1930, hoping to find inspiration for a novel. On the train, he encounters the friendly but cagey Ernst, and at the Kit Kat Klub that night, he meets the irrepressible headline singer, Sally Bowles, who immediately insinuates herself into his life. Cliff’s plans for their future together don’t exactly work out as he imagined.

The same can be said of an older couple’s romance, after Ernst suggests to the landlady that it’s not such a good idea for her to be marrying a Jew.

As the Nazis make their presence increasingly obvious and unavoidable, we get mental flashbacks to Charlottesville this past summer, with the marching White Supremacists, spewing hate about the Jews.

Raygoza’s directorial choices are superb, including the quadruple-duty singing/dancing/instrument-playing actors; the haunting, sinister double-casting of veteran actor Linda Libby and spectacular 14 year-old Scotty Atienza as the Emcee; and the magnificent Cashae Monya as Sally, less dissolute than others, but unequivocally irresistible.

This stellar production underscores the tawdry, hyper-sexualized ambience of a country rotting at the core.

“If you’re not against this,” Cliff warns, “you’re for it.” We’d better listen up.