“THE DIARY OF ANNE FRANK” at Moxie Theatre 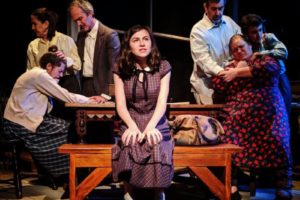 Sad to say, “The Diary of Anne Frank” never goes out of style.

Though there will always be Holocaust deniers, it seems there will also always be a massacre or genocide somewhere on the planet at any given time. And though the news will be reported, the voice of a blossoming teenager and budding writer, emerging from a place of fear and horror, humanizes the inhumanity, touching the heart and soul.

It’s been 75 years since German-born Anne and her family (mother, father and sister Margot) and four others went into hiding for two years, in a small, secret Annex in Amsterdam, with the Nazi threat always just beyond the hidden doorway.

The total area for these Jews-in-hiding was 500 square feet; Anne considered it to be “ideal,” relatively “luxurious” compared to where others were forced to take refuge, or where her friends might be.

Her diary, written when she was 13-15 years old, was published in 1947, after her death (at age 16, in the Bergen Belsen concentration camp, shortly before Liberation and the end of the war). This one very particular story obviously has universal appeal; it has been translated into 60 languages.

The diary inspired a 1955 play (which won the Pulitzer Prize, and a Tony Award for Best Play) by screenwriters Frances Goodrich and Albert Hackett, a 1959 film version, and a 1997 update by playwright Wendy Kesselman. Kesselman’s adaptation includes additional information from the diary that Anne’s father, Otto Frank (the only survivor of the Annex), had omitted in the first published manuscript. The “definitive” edition of the diary was published in 1995, 15 years after Otto’s death. The additions mostly related to Anne’s fraught relationship with her mother, and her acknowledgment of her burgeoning sexuality.

The original stage play, coming so soon after the war, was considered, in retrospect, to sugar-coat the situation a bit too much. The later version is more haunting and disturbing, and that’s the one director Kym Pappas is using at Moxie Theatre.

She has directed the play before (2011 at OnStage Playhouse). She has incorporated some of the directorial touches she implemented then: the wonderful idea of having the actors remain onstage throughout the intermission, ‘trapped’ as the family; and, respecting the gravity of the piece, eschewing curtain calls.

But she’s also added other potent touches, like making the arresting German officers (high schoolers Andrew Sharp, Malcolm Wilson and Gavin Ayers) very young men, as so many of the Nazi forces were. It’s also a gut-wrenching choice to have each of the family members, huddled together offstage at the end, receding into the darkness one by one, as their fate is revealed. This time around, Pappas has delved deeper into the characters and their interactions. And she has assembled an excellent cast to make that happen.

More than other productions, this really feels like an ensemble piece. Each character is well defined, and each actor reveals a believably multi-faceted person, engaging in genuine, credible exchanges.

Otto (strong and affable Eddie Yaroch) is the fulcrum, the stalwart peacemaker of this sometimes contentious group. His wife, Edith (solid Wendy Waddell), sturdily assaying a new role; she played Mrs. Van Daan in Pappas’ earlier production), is not, in this telling, the hard-hearted woman Anne portrays her as, but an apprehensive mother, fearful of the future and frustrated by her obstreperous, often-rejecting younger daughter. Amy Perkins plays the ‘good-girl’ older sibling, Margot, as a bespectacled egghead and wallflower, but she does timidly reveal some of her own adolescent yearnings.

Jonathan Sachs and Holly Stephenson are compelling as the grasping, grousing Van Daans, both showing selfish as well as conciliatory moments. As their son, Peter, Nick Lux shyly, appealingly, interacts with Anne, though he could articulate more clearly and slowly.

Joe Paulson effectively makes the dentist, Mr. Dussel, a fussy little man, impatient and unappreciative. As the ‘outsiders’ who bring goods and news of the world, Jamie Channell Guzman is likably lively and empathic, and Austin Wright is aptly earnest.

At the center of it all is Katelyn Katz, a 15 year-old 10th grader with an impressive amount of theater experience already under her belt. She was solid and endearing as Scout in “To Kill a Mockingbird” at New Village Arts in 2014, but this is her true breakout performance. She so completely inhabits the role of Anne, there isn’t a false note in her relationships or her emotional mutability. This Anne isn’t just precocious, vibrant and self-aware; she has the confidence, courage and indomitability of someone who really could change the world, which is what she most wanted. What a huge loss to humanity. And what a superb piece of acting in making that irresistible character come alive.

The design work for this production is outstanding. Sean Fanning has created a skeleton of wood rafters, multi-leveled and partitioned for the various living spaces. Though there’s a lot of ‘air’ in the set, it still gives a cramped, claustrophobic feel. The costumes (Jennifer Brawn Gittings) are period-appropriate, and it’s a nice touch to have everyone wearing multiple layers of clothing when they first arrive, since they could carry so little with them. The lighting (Chris Renda) changes from somber to candle- or moon-lit. The sound (Lily Voon) brings a hint of the atrocities outside (BBC broadcasts, jackboots, those heart-stopping sirens).

The production is powerful; the story is crucial – for both young people and old. Every junior high and high school student should see this play, to identify with Anne, and to marvel at her honesty, tenacity, talent – and her relentlessly upbeat spirit. Her diary reminds us of the Jewish maxim that seems more real and more threatened than ever these days: Never Again.