“A CHRISTMAS STORY” at Pickwick Players 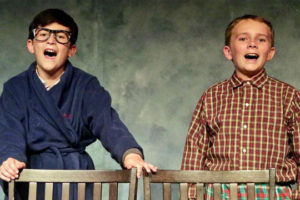 It’s really cool when small theaters premiere a show before any of the Big Boys.

And now, Pickwick Players is presenting the musical version of the beloved 1983 movie classic, “A Christmas Story,” based on the autobiographical writings of popular radio/TV raconteur Jean Shepard. They even scooped Fox TV, which is offering a live broadcast of the show on December 17.

Not only is the story (book by Joseph Robinette) funny, poignant and heart-warming, the music was written by the wunderkinder du jour: Benj Pasek and Justin Paul, Tony Award-winners for “Dear Evan Hansen” and Oscar winners for the theme from the film “La La Land.” Oh, and they also wrote the quirky “Dogfight” (seen at Cygnet Theatre in 2015). And “James and the Giant Peach.” Very clever guys.

It’s a delight to see a community theater put this much effort and energy into a work locals haven’t seen or done before.

It’s a large undertaking, with a cast of 23, including a bevy of kids, ranging in age from 8-14. They’re really focused and committed. They sing, they tap dance, they get their tongue frozen to a pole, they are at peril of having their eye poked out by a Red Ryder Range 200 Shot BB gun.

The latter, of course, is the story’s centerpiece:  9 year-old Ralphie’s fervent wish for Christmas. In the 24-day lead-up, all manner of mayhem confronts his family, including internal and external battles and the delivery (and destruction) of a very weird leg lamp.

But everything gets sorted out in the end, and it’s a merry and loving Christmas for all – even if the turkey got eaten by a dog and the family had to go out for Chinese food instead (and on that subject, the seriously un-PC faux Chinese accent and singing of “Deck the Halls” as “fa-ra-ra-ra-ra” really has to go. But it’s part of the cherished film and also the musical’s script, and reportedly cannot be changed. Ugh).

As in the movie, the story is narrated by Jean Shepard (Jim Williams, warm and wonderful). Directors Heather Deerfield and Adriana Zuniga-Williams have attended to many little details, including putting miniature leg-lamp centerpieces on each of the 25 cabaret tables in the Off Broadway Live space they share in Santee.

Pam Stompoly-Ericson has gone all-out on the costumes; there are myriad changes and they’re all fun. Also great fun: Shirley Johnston’s choreography.

Good thing there are a lot of bodies on that small stage – because there’s a whole lot of furniture-moving for changing locales (in these situations, Less is always More).

Overall, though, the energy is so high, the cast so earnest, and the story so irresistible that the random weaknesses in singing, acting or dancing become secondary and irrelevant.

The community was out in full force the night I was there, and they were loving it. And isn’t that what theater – and the season – are all about? Send ‘em out smiling and awash in the holiday spirit.