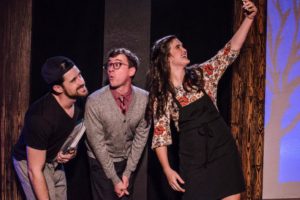 Riffing on Washington Irving’s 1820 short story, “The Legend of Sleepy Hollow,” Adam Wachter, who created the book, music and lyrics, sets his piece in the same locale – Tarrytown, NY, about an hour north of Manhattan – but in the current day instead of 1790. (Interesting side-note: The adjacent town of N. Tarrytown actually changed its name to Sleepy Hollow in 1997, so potent and unforgettable — and presumably, tourist-attracting — is the story. Not surprisingly, the local high school sports teams are called The Horsemen).

Wachter uses the names and skeletal situations of his source material. The awkward outsider, skittish Ichabod Crane, remains a teacher, in this case, of high school music (Vivaldi’s “Four Seasons,” particularly the relevant “Autumn,” is his focus here).

But now, Ichabod is gay. And a recovering addict.

Brom is a jock and a jokester, and a history professor. Also pedantic, manipulative and self-involved (but all three characters are).

He’s married to hyper and hyper-verbal Katrina, who’s never been out of Tarrytown and is miserable with her static, unexciting, unfulfilled life.

The approach of Halloween (the action takes place between October 20 and 31) unnerves her; that’s the day, ten years earlier, that she lost a baby.

When Ichabod arrives in town (escaping demons of both the external and internal kind), Katrina is thrilled, and declares him her “New Gay Best Friend.”

Brom bonds with Ichabod, too, in a way, teaching him the ins and outs of football, about which Ichabod is clueless (put on the spot, he says his favorite team is the Jets, and proceeds to sing “When you’re a Jet, you’re a Jet all the way…” from “West Side Story”).

Wachter has woven all kinds of fun and snarky humor into his very clever lyrics, which often fly by at a breakneck pace. His melodies, though pleasant and sometimes challenging, are somewhat less memorable.

So, there’s a love triangle, as there was in Irving’s tale, but tweaked in a contemporary way. For different reasons, jealousy takes hold; terror and disaster ensue.

It’s a thrilling and chilling 90-minute romp, with more songs than dialogue, and a number of delectable contrapuntal trios.

Backyard Renaissance, which is presenting only its fifth production since its inception in 2015, has scored a nice coup in snagging this world premiere.

The cast is delightful:

Their connections and interactions are highly credible, and their singing is excellent.

The songs consider existential issues like “What do you do when your life isn’t what you had planned?” (Katrina); “I wanted to be somebody… but I make the best of it” (Brom); and “I thought that coming here would alleviate all those pressures in New York” (Ichabod).

“Ever think how we never really know another person,” both Ichabod and Katrina sing. In short order, Ichabod becomes “The Man in the Middle,” which turns out to be a pretty terrible place to be.

The musical is more than just the re-configuration of a legendary ghost story that seems to be rooted in our collective consciousness. It’s a consideration of unfulfilled dreams, and how that results in compromise, disappointment, inertia, bitterness – even violence.

Kudos to Wachter (this is the first, very promising, original musical for the New York-based orchestrator/arranger/musician/composer), and to the team at Backyard Renaissance. They’ve made the very most of a small musical and a small space.