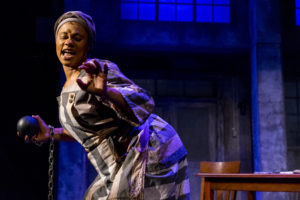 We hear Minka Wiltz before we see her, and her voice is what we will remember of “Black Pearl Sings!,” a 2009 drama-with-music by Kansas City playwright Frank Higgins.

Wiltz plays Pearl, and her aching contralto gets us in the gut from her first notes.

These two indomitable women, butting heads repeatedly, are both, in a sense, slaves to the system. Ten years ago, Pearl mutilated a man for his advances on her young daughter, who she’s now desperate to find. Susannah lost a Harvard teaching job, because a male supervisor took credit for her work. Their alliance will serve both their needs.

Higgins based his story on a factual 1930s relationship: between ethnomusicologist Alan Lomax and his greatest ‘find,’ the folk-and-blues singer, Lead Belly.

The shift from male to female was an interesting choice, adding gender issues to the racial concerns and questions of cultural documentation vs. appropriation.

But the characters are unequally drawn. Susannah is ambitious, tightly-wrapped, devoted to her work and academic advancement. That’s about all we know of her, except her unexplained estrangement from her wealthy family. Pearl is a much more complex and compelling character.

As Susannah, Allison Spratt Pearce, who has prodigious acting, singing and dancing talents, only gets one beautiful Celtic number, and an unnecessary few chords on an autoharp.

The rest of the a capella songs – and most of the show – are owned by Wiltz, an Atlanta-based powerhouse whose gorgeous gospel voice conveys all the ache, anguish and longing of African American history.

There’s a fussiness to the rest of the production, directed by Thomas W. Jones II,  from the imposing set with its oddly mobile pillars, to the on-the-nose sound and lighting punctuation, to the superfluous ‘suitcase dance’ of the second act. The projections are evocative.

Wiltz makes the play well worth seeing. She gives a thrilling, virtuoso performance.