“THE SEASON OF LOVE” at Scripps Ranch Theatre 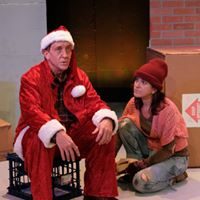 ‘Tis the season – for food, family and friends. It’s also the season of anxiety, conflict and conflagration.

But local playwright James Caputo isn’t really interested in the dark underside of the holiday lights. His new work says it all: “The Season of Love.”

He’s put together four of his award-winning short plays to examine the ages and stages of amour, from new love to stale love, love that’s going – or gone. Tentative, unlikely love that begins with the camaraderie of a shared space – even if it’s a refrigerator box.

In the four vignettes, the characters overlap and intersect in sometimes surprising ways. The stories range from humorous to heartful, forward-looking or retrospective, even delightfully literary. Some of the laugh-lines are predictable, but the intent, emotions and dialogue are solid.

At Scripps Ranch Theatre, John Tessmer directs a stellar cast, maintaining a light touch and crisp timing. The versatile Paul Morgavo is effective in every scene, first as a newly dating divorced mensch, and later as an educated, literate hopeless and homeless person, perfectly, if inadvertently, matched by Julie Clemmons as a street-wise, whip-smart optimist.

The most poignant segment is between Jill Drexler and Eric Poppick, as a long-married couple who’ve stagnated in the humdrum of their lives. Both think they want out. But then they think again. It’s unnecessary, and interrupts the flow, for them to talk to the audience. Still, they have a lot to say about marriage, acceptance, and the comfort and contentment of a warm body – a presence, as they call it.

Sherri Allen, Grace Delaney and Rhiannon McAfee also contribute creatively, though there are moments when their characters lean toward caricature.

Some of Caputo’s language is clever and organic; some feels more forced, but it’s all delivered well, within a cunningly rotating set.

So, as the holidays descend upon us, this quartet of stories can serve as an impetus to contemplate what love and relationship mean to you – whether you have them or not.