“THE MOORS” at Diversionary Theatre 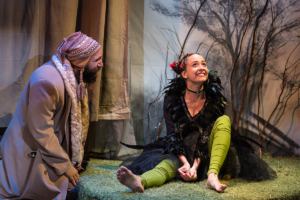 You can practically hear Heathcliff and Cathy calling to each other across the desolate, windswept landscape.

What with the ominous music, the funereal wood and wine-colored furnishings, and the fog wafting in, you get the creepy feeling that things will not end well. And of course, they don’t.

“The Moors,” by Jen Silverman, is a macabre satire, conjuring (and Americanizing) those Victorian literary oddballs, the Brontës: Charlotte, who wrote “Jane Eyre”; Emily, who created Heathcliff and Cathy in “Wuthering Heights”; and their dissolute brother, Branwell, who lived together in a gloomy, isolated mansion in the midst of the Yorkshire Moors.

There were actually six Brontë offspring; none lived past the age of 39 (two died before their teens, but this was not uncommon at the time). They were famous for their imaginations, creating elaborate worlds to play in within the merciless environs. These games morphed into their tormented novels.

The eccentric family has always been ripe for exploitation and exaggeration, and New York-based playwright Silverman has stepped into the fray with subversive, diabolical glee.

She introduces us to the spinster sisters’ bizarre existence, with austere, severe Agatha in charge of everything and everybody, particularly her unhappy, unacknowledged sister, Huldey, her (unseen) profligate brother, Branwell and the maid, whose name and hat change depending on whether she’s perceived to be in the kitchen or the parlor. It’s either Marjory or Mallory; one’s pregnant and the other has typhus.

Somewhat peripheral to the main events, but no less entertaining, are a philosophical Mastiff, mired in existential dread, and an air-brained but independent-minded Moor-Hen. And, as is common in these Gothic tales, a governess, Emilie, is added to the mix. Mayhem, murder and lesbian love ensue.

The perfect shepherd for this black-sheep of a sendup is Lisa Berger, one of the best directors in town, who relishes diving into deep, dark comedies. She and her marvelous cast are having a longing, lusty field-day with this West coast premiere at Diversionary Theatre.

Many precise and ingenious directorial touches enhance the sometimes-lyrical, often melancholy text. Everything is taken dead seriously, which only enhances the humor.

Time and place are far from rigid in this parsonage. Or, as the final line of the play has it, “Everything is the same – but everything is always different.” It’s whatever day or time Agatha and the maid say it is. The Moors are a stimulating place for a bracing walk – or “cruel, heartless and inhospitable,” haunted by ravenous animals and deadly quicksand.

There’s a good deal of talk about misery, loneliness and happiness (the latter unknown to just about everyone, except the dog, and that only briefly).

The unit set (perhaps Kristen Flores’ best, bare branches included) looks like a parlor, but it’s called whatever the inhabitants say it is; it could be the bedroom or the kitchen or the Great Hall – which confuses Emilie at first (there’s also no child for her to teach, and the titillating letters written to her in advance of her arrival, turn out not to have been amorously composed by Branwell at all – though she envisioned him as the love of her life). Emboldened by her oppressive surroundings, she’ll find her power and rapture.

The lighting (Karen Filijan) is excellent, and the costumes (Shirley Pierson) are terrific – especially the bulky winter-wear for the Mastiff and the feathery, flouncy getup for the Moor-Hen.

Each member of this superb ensemble gets multiple moments to shine.

Kim Strassburger gives a finely nuanced performance as Agatha, the dour, tightly-wrapped autocrat – until she lets her hair down (literally and figuratively).

Hannah Logan is uproarious as the mousy, miserable, mewling Huldey, an inveterate diarist who just wants to be famous, noticed and appreciated.

As the maid, Gerilyn Brault brings a funny, snarky sarcasm to her every utterance and move. She takes particular joy in confounding Emilie (wonderful, seductive Whitney Briana Thomas), who isn’t as clueless as she first appears.

Everyone here is capable of anything; violence always lurks just below the surface.

Some of the play’s more contemplative considerations concern God and love, gender roles, class distinction and sibling rivalry. Many of them take place between the marvelous Rachel Esther Tate and John DeCarlo – as the flighty but grounded Moor-Hen and the brooding, pensive but dog-brained Mastiff. Their interludes are a fanciful bright spot in the dark morass of the Moors. Until they aren’t.

Huldey is the one character whose fate remains ill-defined and unresolved, but Logan does get to break out of her timorous shell, in one fantasy, torch-song scene.

It’s the meticulous attention to detail that makes this production soar. Despite the constraints imposed on their sex in the 19th century, these passionate females rule. But, like the menacing Moors that practically engulf them, they can be both beautiful and savage.