“FLY BY NIGHT” at Coronado Playhouse 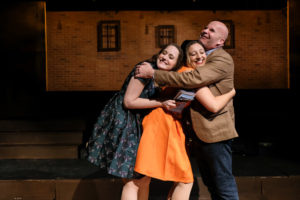 There’s nothing fly-by-night in this 2014 musical, five years in the making, having its San Diego premiere at the Coronado Playhouse.

There’s a deliberateness about “Fly By Night,” a sense of contrivance, a circularity that jumps around in time and arrives back where it started, more or less. In short, the show’s reach exceeds its grasp.

It’s a parable, a fable, a cautionary tale about Fate and Free Will, the paths chosen or not, taking control of your life, and getting off your duff to embark on your life’s journey.

The Narrator, who walks us through the time-hops and leads us up to the East coast Blackout of 1965, calls the story a “love triangle”: a young man and two sisters. But then, to upset the balance, another guy is thrown into the mix.

Yes, there’s love, but also heartbreak and tragedy. Every character, including the two older men — a grieving widower and an angry, bitter deli owner – has an arc, and winds up in a different place from where they started the year before.

The interactions and intersections of these characters (plus a few others played by the Narrator) suggest a Cosmic Plan. A psychic is consulted; the stars are contemplated and sung about, repeatedly.

It’s all sweet and bittersweet, but not wholly satisfying. Though it bears similarities, “Our Town” this isn’t. Nor, in the musical realm, “Into the Woods.”

Despite its long workshop and gestation period, it still feels like the college exercise (albeit at Yale) that marked its beginning. It’s billed as Conceived by Kim Rosenstock and written by Will Connolly, Michael Mitnick and Kim Rosenstock, Yale classmates, all. It still bears the whiff of a novice, sophomoric effort.

Still, it has its charms, and some pleasant, rock-ish musical numbers. And several plot twists and unexpected turns.

In spite of the gypsy predictions, life doesn’t exactly proceed as anyone expects, and this is true for every character, whether they have high hopes or are rammed into a rut.

At the Coronado Playhouse, director Manny Bejarano tries to find the heart in the piece, without succumbing to too much sentimentality.

Weston Bennett is perhaps the most natural and unaffected performer as Harold, the hapless, demoralized milquetoast sandwich-maker, who sequentially falls in love with the two sisters: ambitious Daphne (perky Tara Brown-Sampson) who’s hellbent on becoming a Broadway star; and earthbound star-gazer Miriam (solid Catie Marron) who’s content to be a waitress, and a cheerleader for her sister.

Harold’s mother’s death begins the show, and his father (John Craig Johnson, an opera voice instructor who gets a moment to display his operatic chops), can’t get over the loss.

It’s never made clear why Harold, a generally nice, if zhlubby, guy, avoids contact with his Dad for almost a year – until he himself is in distress.

Crabble (overstated Thomas Fitzpatrick) is relentlessly crabby (and loud), and abusive toward his beaten-down employee, Harold. But he, too, finds a brief moment of fulfillment.

A supposedly rich, eccentric playwright, Joey Storms (endearing Andrew Paiva) is, as presented here, an ill-defined character, seeming neither obviously rich nor particularly eccentric, though he’s the only one who sees Daphne’s star potential.

The burden of the storytelling (and this show wants to be all about storytelling) falls on the Narrator. Fortunately, engaging, energetic Michael Van Allen is up to the task, cycling through the various tales, and playing a few ancillary characters (most amusingly, the Gypsy fortuneteller), though a few are a bit over-the-top.

During the performance I attended, there were many (occasionally ear-shattering) sound and miking problems. The sound balance was off through most of the show. The excellent four-piece band (under the music direction of Emily Awkerman), frequently overwhelmed the singers.

The costumes (by director Bejarano) do not scream mid-‘60s, but then, these girls hail from South Dakota, so maybe they weren’t quite up with the Twiggy/pop art/Mondrian styles of the moment. The set (Karl Bunker) and lighting (Josh Olmstead) are functional, and Bejarano makes good use of the various stairways and levels.

The takeaway is intended to be introspection: Who are you supposed to be? What are you doing with your life? But the show isn’t as profound or thought-provoking as it thinks it is.

Kudos are due to the committed performers and to the Coronado Playhouse, for once again presenting a challenging musical that’s never been produced in these parts before.