“THE SANTALAND DIARIES” at Diversionary Theatre 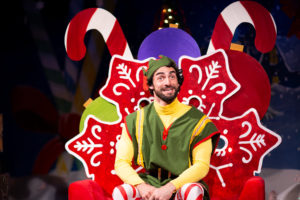 What could make life a living hell for a reluctant elf in the world’s largest department store?

Well, just about anything, from wailing children to demanding parents to the designated Vomit Corner at Santaland in Macy’s Herald Square, New York.

Best-selling writer and hilarious deadpan humorist David Sedaris first read his essay about his less-than-joyful holiday experience, “The Santaland Diaries,” on NPR in 1992. It became an instant classic and launched his wildly successful career.

In 1996, actor/director Joe Mantello adapted the piece into a one-man, one-act, one-hour play which remains a seasonal perennial, a deliciously tart, twisted antidote to the annual sleighful of treacly holiday confections.

Sedaris reported that he was out of work ($20 away from walking dogs”), and only wanted to be a star on the soap opera, “One Life to Live” when, in desperation, he answered the Macy’s ad to become one of Santa’s helpers.

The training was rigorous, the costume was ridiculous, the various Santas were challenging (to say the least), and the daily crush in the leadup to Christmas only served to underscore the stressed-out insanity of the season.

He amused himself by committing a variety of slyly subversive acts — including singing a Christmas carol in the precise style of an inebriated Bill Holiday.

This is very funny stuff, and at Diversionary Theatre, in what is being called a Legacy Production, Wil Bethmann is making it sing (and he does a damn good Lady Day!)

He’s not as snide, cynical or snarky as some Crumpets I’ve seen. This Crumpet (that’s the scrumptiously dunkable name he’s chosen for himself-as-elf) seems to be trying to find and maintain even a tiny tinsel of the magic of Christmas in the midst of the mayhem and madness.

The set (Justin Humphres) is a wonderland of giant gift boxes, faux snow and gargantuan candy canes. The costume (Elisa Benzoni), sound (TJ Fucella) and lighting (Curtis Mueller) perfectly suit the sensibility. Even the theater lobby and halls are decked out (Justin Beets).

Before the show begins, you can have your photo taken with Santa. And during it, you can join in a rousing Santa cheer. (Did you know, Crumpet helpfully points out, that Santa is an anagram for Satan?).

Bethmann is terrific company, thoroughly endearing and adorable. There’s nothing like a striped-tights, sarcastic elf to catapult you into the season.

After that bracing intoxicant, head down to the Fritz Lounge adjacent to the lobby for a delectable digestif: “Linda Libby’s HoliGay Storytime,” 30 minutes of amusing, poignant, interactive stories and songs, presented by a San Diego favorite.

As directed by Anthony Methvin, both pieces are supremely entertaining. These aren’t your teetotaling Aunt Tilly’s sugar-coated Christmas treats … but they sure will send you out in high spirits.