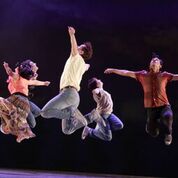 “West Side Story,” the beloved 1957 musical based on the Romeo and Juliet tragedy of star-crossed lovers, has returned to Moonlight Stage Productions, after earlier airings in 1987 and 2007.

And it’s a knockout.

The magnificent score was composed by Leonard Bernstein, and the lyrics were written by a 25 year-old Stephen Sondheim, making his Broadway debut.

Equally iconic was the Jerome Robbins choreography. Only two people in the country are certified by the Robbins estate to precisely reproduce the phenomenal choreography, and Moonlight snagged one of them: Hector Guerrero.

Since Steven Spielberg is directing the 2020 remake of the movie version of the musical, the Robbins choreography is about to be frozen, made unavailable for six years—even though Spielberg is bringing in his own choreographer, Tony Award-winning Justin Peck, resident choreographer at New York City Ballet.

So you won’t be seeing another live version of Robbins’ legendary work any time soon.

His unforgettable moves are spectacularly executed by a mega-talented cast, providing the best dancing seen on any local stage in a long time. Almost every one of the 32 performers onstage (except for the four Adults) is a dancer. And surprisingly, only four of them are Equity (union) members.

The story is set in the Upper West side New York in the late 1950s, where white vs. Puerto Rican gangs are constantly fighting over a tiny piece of turf, under the harsh but often ineffective surveillance of a detective and a cop (“Officer Krupke,” Sondheim at his funniest, providing comic relief in an otherwise dark tale).

At the school dance, just before a deadly War Council and “Rumble,” the Jets’ Tony meets the young, ingenuous Maria. As in Shakespeare’s original, it’s love at first sight (“Maria,” “Tonight”).

But killing will inevitably ensue, and the still-shocking, gut-wrenching ending may (or may not) give rise to healing and reconciliation. Shakespeare makes the rapprochement more definitive; here, it’s only a vague possibility.

What’s striking, though, is the relevance of the narrative to today: gang warfare; prejudice against immigrants; caustic, racially-based name-calling; police brutality; whites (even though their families were immigrants, too) rejecting people by the color of their skin, and insisting that they’re not Americans. Sixty years on, and we haven’t come very far at all.

In his production, Moonlight artistic director Steve Glaudini doesn’t shy away from the similarities, and he superbly matches the drama to the memorable music and dancing. Every emotional moment is intense and heartbreakingly believable—whether between Tony and Maria; Tony and his best friend, the Jet leader, Riff; Maria and her almost sister-in-law, Anita; or, devastatingly, Anita cornered by the Jets.

The cast is uniformly outstanding, with strong vocal skills (except for a few shaky notes, perhaps due to opening night jitters), from the solos and duets, the potent macho-male numbers to the famous “Tonight” quintet.

The score is muscularly played by a robust 29-piece orchestra, with music direction provided by Randi Ellen Rudolph and Elan McMahan, who also conducts.

This production makes the sixth “West Side Story” for Taylor Simmons, but his first as Riff. Armando Eleazar, playing Bernardo (Maria’s brother, Anita’s boyfriend), is about to make his Broadway debut in the show’s upcoming revival, opening in February.

Michael James Byrne (Tony) was last at Moonlight in 2015, starring in “All Shook Up.” As Anita, New York-based Courtney Arango is a bona fide find. She adds consummate dancing skills to her stellar portrayal of the sharp-tongued fireball.

And as Maria, Glaudini cast the wonderful 18 year-old Bella Gil, who just graduated from the Orange County School of the Arts (she had to leave the recent Moonlight gala early, to attend her high school prom). Onstage, her connection with Tony is unfailingly real and compelling.

The evocative sets, costumes and props were rented from Music Theatre Wichita, though local Renetta Lloyd added a good deal of additional costume design to the credited Dixon Reynolds.

This is not a “West Side Story” you will soon forget. It’s guaranteed to thrill you as it revels in romanticism and breaks your heart.