“AROUND THE WORLD IN 80 DAYS” at New Village Arts 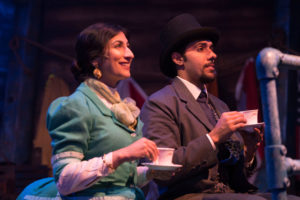 In what has become Jules Verne’s most popular and enduring creation, his 1873 “Around the World in 80 Days,” the stuffy, reclusive, “mathematically precise” Englishman Phileas Fogg takes a big risk: he bets half his fortune that he can circle the globe in less than three months.

In 2019, New Village Arts has also taken a risk: turning the overstuffed novel into a world premiere, small-cast musical, combining disparate elements and hoping it’ll fly. (Speaking of which, there was no hot-air balloon in the original travel plan, as Laura Eason so cleverly and definitively states in her 2008 stage adaptation: “It’s not in the book,” she has Fogg say. That means of transportation, however memorable, appeared only in the 1956 movie version).

Back in Carlsbad, NVA, considering the rip-roaring adventure of the piece, enlisted a local, self-proclaimed ‘pirate band,’ The Shantyannes, to compose a score. Though there are no actual pirates in the story, and the music does not sound piratical, the skillful four-piece band, under the musical direction of Tony Houck, is dressed in pirate garb. And the set (Tanya Orellana) has the sense of a ship’s hold.

The 13 songs, written by Joseph Freeman and Renee Moreno, do not, in general, serve the usual function of musical theater: furthering the action or defining character or intention, except, perhaps, in the case of the budding romance between Fogg and the Indian widow, Mrs. Aouda, some of the strongest moments of the evening. Mostly, they describe the setting.

The show is staged (by Kristianne Kurner) in the manner of bare-bones, minimalist, all-hands-on-deck, hyper-theatrical storytelling, but the effect seems less organic than that, more fussy and forced, with the energetic ensemble trying so hard to please, the result feels more like an over-enthusiastic English music hall production.

The effort overall feels frenetic, what with all the moving of boxes hither and yon. And things are busy enough, with the very brief stops at all the various cities and countries along the way.

The cunning means of identifying the ports of call is having their national flags paraded across the stage (with an extra rainbow flag following the Stars & Stripes for the San Francisco landing).

Those identifiers are augmented by Jonah Gercke’s wonderful projections: archival black-and-white images that clearly establish time and location. They also give the eye somewhere to rest, but they really don’t exactly match the tone of the production.

Though all the scuffles and fights tend to look the same, there is some clever staging, especially for the “Storm at Sea.”

The four lead characters are given fully inhabited performances: Frankie Alicea-Ford as the rigid, disciplined, eccentric Fogg; limber, double-jointed tightrope-walker Audrey Eytchison as his ingenious (and ingenuous) valet, Passepartout (who is delightfully engaging, but could use more Frenchifying); AJ Knox, aptly bumbling as Inspector Fix (convinced that Fogg is the thief who robbed the Bank of England), ineptly (and often amusingly) following him around the world so he can collect a reward; and Farah Dinga as the gentle but firm (especially assertive in matters of romance) Mrs. Aouda, whom Fogg rescues from a funeral pyre; but she winds up rescuing him from himself.

So, there are sweet and smart and even surprising moments (Alexander X Guzman’s hand-walking!). The singing, dancing and accents are variable, as is the miking, which doesn’t help in discerning the lyrics.

Verne’s story bears a mixed message. Originally intended as a satire of English manners, it extols the wonders of technological advances, as well as British imperialism and the power of money. (Fogg can overcome any obstacle with a flash of cash). But ultimately, he’s completely changed by the power of love.

Similarly, at New Village, the power of commitment, enthusiasm, community, love of theatermaking — and including in each performance one member of The Mainstage Players, a professional training program for young adults with neurodiversity — transmogrifies the various elements into something greater than the sum of its parts.