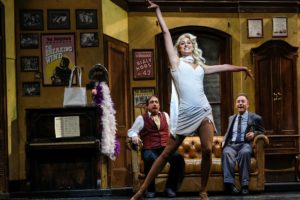 The company opens its 39th season with a boffo, brassy, bawdy hit: “Mel Brooks’ The Producers.” Using the outrageous, ab-fab Broadway sets and costumes, and re-creating the original direction and choreography (both Tony award-winners for Susan Stroman), the production values simply can’t be beat.

Larry Raben, who directs and stars, played Leo Bloom for a time on Broadway, and for the full run in Las Vegas. At Moonlight, he also inhabited another Gene Wilder role, Frederick Frankenstein in Mel Brooks’ “Young Frankenstein,” to great acclaim. So, Raben, who was just named the new artistic director of the Welk Resorts Theatre, has deep knowledge and experience with the show, its creators and his blankie-clinging role as the milquetoast Leo.

Bloom is a hapless accountant, a wimp in every way, though he’s always dreamed of being a Broadway producer. When he enters the office of fading White Way producer Max Bialystock, and sees the deplorable (and questionably legal) condition of his financials, Leo muses: “Under the right circumstances, a producer can make more money with a flop than with a hit.”

Thus begins an unlikely partnership, and the search for the worst play, director and cast to raise 2 million dollars for and then split the money and split. A foolproof plan.

But as everyone knows, nothing is foolproof on Broadway. “Springtime for Hitler” turns out to be a triumph, and jailtime is in the offing for the dynamic duo – with a few twists along the way, natch..

The first act is nonstop laughs. Jamie Torcellini (who played opposite Raben as Igor in “Young Frankenstein”) perfectly inhabits the role made famous in Brooks’ 1968 non-musical film by Zero Mostel, and then on Broadway by Nathan Lane, whom he sometimes sounds like. (Raben is occasionally reminiscent of the late great Wilder). But they both put their own stamps on the crazy characters.

The cast is terrific; even the most minor characters are gems. (Gerilyn Brault, I’m talking to you! —  in your myriad roles). Luke H. Jacobs is a hoot as the Nazi playwright Franz Liebkind; Max Cadillac fairly flies as the supremely fey Carmen Ghia, right-hand man to funny, flamboyant Josh Adamson as Roger De Bris, the director-turned-star of the new musical. Katie Barna, with her 6-foot long legs, is a hot (Swedish) tamale as the sexy secretary/singer/dancer Ulla.

Jennifer Edwards lights it all up and Jim Zadai keeps the sound crisp.

Still, the show seems to lose a little of its luster on multiple viewings. In 2001, it won a record-breaking 12 Tony Awards; nothing has surpassed it – including “Hamilton”! – before or since. The slow spots begin to stand out amid the frenzy. But then, the frenzy is so deliciously wild and outlandishly politically incorrect that it manages to offend – or crack up – nearly everyone.

Kick off your summer with a heavy dose of hilarity in Moonlight’s musical extravaganza.