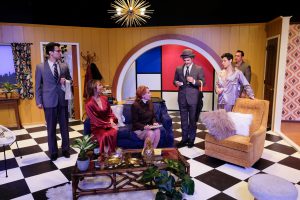 Not everyone loves farce. It can be silly and goofy and, as required, filled with slamming doors.

But when it’s done right, as at Scripps Ranch Theatre, under the crackerjack direction of Francis Gercke, it’s downright uproarious.

The wild 1969 comedy, written by English actor/writers Ray Cooney and John Chapman, is set in the top-floor London flat of Mr. and Mrs. Markham. What starts out as a somewhat quiet evening before a stodgy dinner engagement, turns into a never-ending onslaught of plans and counter-plans, deceits, fabrications, subterfuge, undressings and mistaken identities.

It takes a long time to introduce the nine wackadoodle characters and set up the situation of mass (but deftly controlled) confusion. By Act 2, you will be rolling in the aisles and laughing till you cry.

The cast is terrific; each actor has moments of superb comic business and physicality. The timing is impeccable, a must for good farce. You couldn’t ask for a funnier ensemble, or a second act with more sustained hilariousness.

Don’t dawdle or dither. You have to hurry to see this (and you should). It closes on June 30.