“SIGNIFICANT OTHER” at Diversionary Theatre 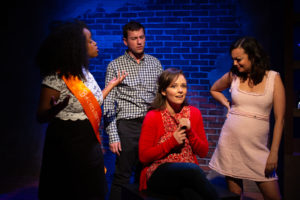 To paraphrase an old Neil Sedaka classic, “Growing up is hard to do.”

That’s especially true for the current cohort of twentysomethings. Many of them still live with their parents, some well into their 30s. They expect everything – interests, friends, activities – to remain the same. Not everyone is ready to move into adulthood at the same rate and time.

Jordan Berman is 27 when we meet him. He’s gay, but his three BFFs are women. They’ve laughed together, cried together, in some cases lived together.

One by one, the gal-pals start meeting their Mr. Right (or at least,  Mr. Good-Enough-for-Now) and getting married. Jordan feels abandoned and betrayed, alone and unloved. It’s selfish and self-pitying of him, but he’s a New York Jewish neurotic who overthinks everything and is terrified that he’ll always be single. Having someone to love is a major goal in his life. He doesn’t want to be a bridesmaid (well, actually, he does).

“Significant Other,” by Joshua Harmon (“Bad Jews,” at Cygnet in 2017), is structured around the bachelorette parties of Jordan’s GFs. There’s a lot of drinking and swearing and sex-talk. Jordan becomes increasingly hysterical.

Harmon’s dialogue is witty and believable (if considerably, and intentionally, exaggerated), and the laughs come frequently and easily.

Though the parties are the backbone of the play (there are weddings, too), they feel protracted and repetitive, in what is otherwise a very sharp, very funny comedy (with diva-drama).

Diversionary Theatre is staging the San Diego premiere, under the clever and detailed direction of the company’s producing associate, Anthony Methvin. The set design (Justin Humphres) is ingenious: three floor-to-ceiling bookshelves, attractively lit (Melanie Chen Cole) filled with books and tchotchkes, as well as needed prop and costume pieces. The production is enhanced by its sound (Melanie Chen Cole) and costumes (Elisa Benzoni).

Meanwhile, he’s looking for love in all the wrong places, obsessing about a handsome, disinterested guy at the office (Bryan Banville, in hunk mode), even going so far as buying the size 12 green Converse sneakers he wears, so Jordan can hold them and hug them. Um, ugh.

Another gay man at work (Wil Bethmann, recently excellent in Cygnet’s “Angels in America”) is, or should be, as written, a lot more fey and gossipy, but of is no interest to Jordan.

There’s a promising date (Bethmann again) whom Jordan latches onto as The One, but… that fizzles, too.

Talented Banville and Bethmann also deftly play all the fiancés, though it would be nice for their look to be more varied to distinguish the characters (glasses occasionally help). Dagmar Krause Fields is aptly loving and maternal (if a bit suicidal herself) as Jordan’s doting Grandma, who is supposedly losing her memory as well as her friends. They replay virtually the same scene three times (there’s a trinity of sorts everywhere), looking at the same old family pictures and reminiscing. She’s remarkably patient with her grandson’s kvetching, and she ultimately gives him the most useful advice of his life.

At the center of all this mating and dating and whining, Tom Zohar is pitch-perfect as the whirling dervish that is Jordan, cleverly capturing this one-man emotional maelstrom in an endlessly amusing and endearing way. Sometimes you want to hug and comfort this guy, and sometimes you want to hit him over the head with a frying pan and tell him to stop navel-gazing, pull up his big-boy pants and grow the hell up.

By the poignant ending, there’s a glimmer of hope that he might.