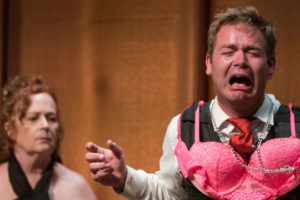 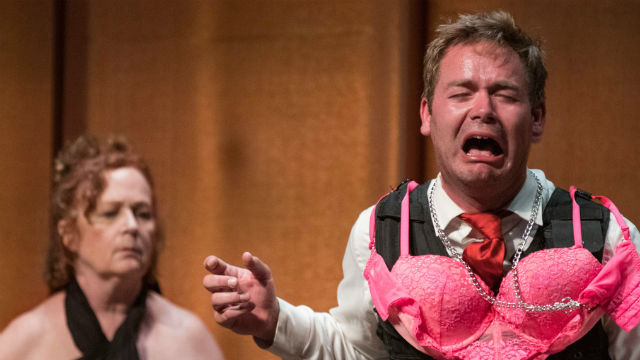 Art takes time, we’re told. But if you had only one day to create a piece of theater art, could you do it?

That’s the challenge of “That 24-Hour Thing,” the closing event of the 7th annual San Diego International Fringe Festival.

The experience is stressful, nerve-racking, energizing and enervating for the participants, and pretty thrilling for the audience.

It all started about a decade ago, when local actor/director/writer/producer Hannah Logan saw a “poorly done version” of the concept in another city.

The idea stayed in the back of her mind, and early in 2014, when she was told that the Fringe, then in its second year, had access to an additional offsite location —the San Diego Central Public Library downtown—she leapt at the opportunity.

At the first Fringe, she had performed her own one-woman show, “Work: In Progress,” but she jettisoned a repeat of that creation.

“It’s too lonely,” she says. “I thought, there’s so much talent here, what can I do to involve a lot of people?”

And she remembered that long-ago time-constrained production.

“I know plenty of playwrights, directors and actors in town,” she continues. “And I thought they’d really enjoy this.”

She quickly amassed a number of willing local participants. But she couldn’t come up with a name for the event. What started as a place-holder turned into the long-term moniker: “That 24-Hour Thing,” produced by LoganSquared Productions, the company she shares with her life and business partner, Ron Logan, a graphic designer, scenic designer, photographer, videographer and visual artist.

“At the time,” she says, “I just grabbed a handful of playwrights I knew could write. Five, I think, that first year. And a handful I knew who could direct. And a group of good, solid actors—three per play.

“The bonus for playwrights and directors is that those without a high profile get to have their work seen. I always try to add in new faces into the mix, people who have potential and will get the benefit of being seen.”

Best of all for the audience: it’s free (though donations are accepted at the door).

The one-performance-only experience has become one of the most popular Fringe events, named a Critic’s Pick and Fringe Best Bet. In 2016, it won the Jonathan Dunn-Rankin Scholarship/Creative Arts Initiative Award Supporting New Works.

For the first two years, Logan hand-picked the playwrights. But then she decided to open it up to competition, to expand her field of playwrights and “to make sure they could write a play in 24 hours. Writing a full-length play and writing a 10-minute play in 24 hours are very different tasks.”

She sent out a call in April. Twenty-one playwrights expressed interest; 17 submitted plays. On a day late in May, playwrights received an email with a series of prompts: a prop (this year, a root vegetable); a location (this year: far from home); and a line of dialogue which had to be included (this year: ‘Sadly, this isn’t the first time he/she/they have done this’). They were given 24 hours to create a 5-page mini-play. A panel of seven judges, comprising directors, actors, avid theater patrons and “24-Hour” alumni, rated the scripts.

The final choices for the June 16 Fringe event were seven plays and three monologues.

On the day before the actual “24-Hour” performance, It’s the playwrights themselves who create the prompts, which are thrown in a box, then chosen by each writer at random.

Logan loves the idea that ”all the prompts come from the imagination of another playwright.”

Playwrights are not given a required line of dialogue. But they pull from a box a description of the actors in this year’s pool, their theatrical type and any special skills they may have.

Though the play selection is now out of her control, Logan still chooses the directors and actors.

“I select people with really good craft. The actors have to be able to memorize a part in a 10-minute play in just 8 hours. I ask if they’d rate their memory as ‘Savant,’ ‘Very Good’ or ‘Good.’ They’re all very honest in answering the question. If they’re at the Savant level, they might get a monologue.

“What comes out each time is a really great show. The adrenaline rush is enormous. Performers get really excited. Most come to me and tell me how grateful they are and what a great time they had. But I’ve had people do a great job, be hilarious onstage, and say to me ‘Never call me again for this. It was so stressful. I’ve never been so terrified in my life.’

“This year, we have a plethora of exciting special skills that actors possess and that playwrights will probably want to incorporate. For instance, we have a tap dancer, and someone who speaks Russian.”

So, on June 16, there will be a total of seven 10-minute plays and three short monologues, created by a total of 40 theater artists representing age, gender and ethnic diversity. Two writers and one director come from L.A. This year’s actors range from teenage to mid-70s. Logan, who works hard to achieve parity, will be among the six female directors. Fourteen of the 24 actors are female, as are six of the ten writers.

Amazingly, most playwrights turn in their scripts just three or four hours after the clock starts ticking. The latest submission came at 4am.

Before 9am, Logan has to make the playwright-director-actor matches, print copies of all the scripts, and print the program Ron has designed.

At 9am, everyone meets to get acquainted, obtain the scripts and start rehearsals. Within eight hours, memorization, staging and props/costumes must be complete. (The groups get only a couple of minutes to get their gear off the stage for the next performers).

“The thing I love about this event,” says Logan, “is, I know there are people that come who are not regular theatergoers. For one thing, it’s free. So that’s an attraction for some. And it’s at the library, where many people already attend events. The family and friends who come to support the participants are not necessarily into theater. But they don’t have to sit through one long play; what they’ll get is ten different theater experiences.

“I’d like for people to leave ‘That 24-Hour Thing’ having really experienced the power of theatre. It’s something palpable that’s shared between the actors and the audience, and among the audience members as well. An agreement is made to go on a journey. The ‘T24HT’ team of playwrights, directors and actors are particularly brave guides because they ask you to go with them despite their own lack of compass or map. What we often discover together is hilarious, sometimes challenging, and often magical. I want people to appreciate how devoted artists are to their craft. I think the witnesses get that. They’re in awe when we pull it off. So are we.”