“MENOPAUSE THE MUSICAL” at the Welk Resort Theatre 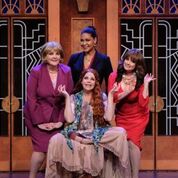 Sometimes, a good play gets a lousy production. Sometimes, the music overpowers the singers or the set overwhelms the action. And sometimes, the performances outshine everything else.

Such is the case with “Menopause the Musical” at the Welk Resort Theatre. Twelve years ago, when I first saw the show, I thought the jokes and lyrics were lame, though they riffed on some great songs from the ‘50s, ‘60s, ‘70s and ‘80s. The choreography didn’t impress.

Written by Jeanie Linders in 2001, the musical parody played Off Broadway for four years, has been running in Las Vegas since 2006, and has been seen by 11 million people worldwide. The music is recorded, the choreography is set; every aspect is handed-down.

And yet, in the current production, everything feels fresh and lively and surprisingly funny. Local director/choreographer Natalie Nucci re-created the dance moves and gave them a sharp edge and a nice spin. But it’s the four phenomenal comic actors that really make this show sing.

Melinda Gilb and Anise Ritchie were in the previous production. But, except for Ritchie’s knockout turn as Tina Turner, nothing seems the same. What’s different is the level of talent, both vocal and comedic. And the obvious chemistry among these women, who seem to be having a fabulous time. Most important, Nucci gave them freedom to put their own sidesplitting stamp on their characters.

These four disparate women meet at Bloomingdales New York, and sing about hot flashes and mood swings, anti-depressants and vibrators.

Ritchie is the high-power Professional Woman, who can’t remember why she came into the conference room. Gilb is the straitlaced innocent from Iowa who does uproarious battle with a piece of black lace lingerie. Eileen Bowman is the sexy Soap Star who’s gaining in age and losing her looks, but still vamping away, and does a mean Marilyn. And Bets Malone, the Earth Mother, is an overgrown hippie who can’t Om her way out of The Change.

Watching these four is theater magic, a Master Class in musical comedy.