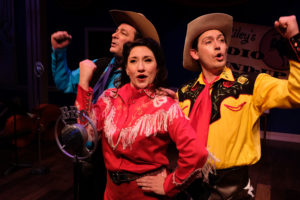 “Chaps” is full of corn and beans.

The only link to that wacky British group is, well, Brits. And the BBC, the setting for this hokey musical revue, where an American cowboy singing troupe fails to show up for a live broadcast.

So the class- and dialect-ranging studio staff is forced to step in and fake it – with assistance from the tour manager for Tex Riley and his Radio Roundup, who manages to have made it to the BBC with scripts and costumes intact.

You have to be a certain age to know these old cowboy classics, like “I’m an Old Cowhand,” “Tumblin’ Tumbleweeds” and that Gene Autry favorite, “Back in the Saddle Again.” The bottom-basement humor, however, may appeal to those of any age who have a penchant for down-home silliness. Some of the supposedly Texan dialogue comes off pretty funny in a Toff or Cockney accent, and the dummy routine is downright hilarious in the hands – and tiny bouncing feet – of Charles Evans, Jr. Arusi Santi gets lots of laughs as the beleaguered and over-anxious radio sound-effects guy, who probably has PTSD.

Speaking of which, the proceedings are momentarily interrupted by an air raid drill, which prompts good wishes to the soldiers fighting in World War II, and serves as a call to take shelter for intermission. But the only real excuse for a second half is a costume change; otherwise, the show would do better as a one-act.

The direction is fleet, though the dancing and choreography are weak. The singing and harmonies are excellent, as are the colorful getups. This show has one thing Lambs’ performers do especially well: playing-and-singing simultaneously, while trading off instruments.

If you’re in the mood for yodeling, creaky comedy, old-fashioned hijinks and songs your grandpaw sang, saddle up and mosey on over.