“PUT YOUR HOUSE IN ORDER” at La Jolla Playhouse 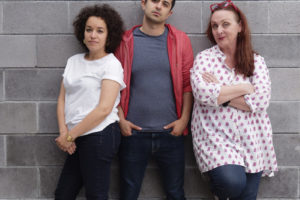 While each form has its imaginative moments, the whole doesn’t really hang together, though the characters are intriguing.

The piece starts with a rapturous rap – a monologue that’s so rhythmic and musical, it should be backed by beatboxing. Later, there’s a shocker moment that had me levitating out of my seat.

But mostly, the play feels like it’s trying to say too many things – about love and sex, changing cities, fear, violence, even “Trump’s America” and the “lamestream right-wing media.”

The 100 intermissionless minutes feel protracted and yet, too many questions about character and plot remain unanswered.

In Evanston, just outside Chicago, twentysomethings Caroline and Rolan are having their third hookup and first formal date, at her family’s massive home. They don’t know much about each other; minimal details unfold slowly. Caroline’s parents seem to have abandoned her. Now everyone, including the eccentric, middle-aged neighbor, Josephine, seems to covet the house. Then all hell breaks loose. Since there are twists and bombshells to come, it isn’t fair to give too much away.

In this world premiere at the La Jolla Playhouse, the sleek wood homestead is stunning, replete with lawn, firepit and stained glass windows. The sky changes color with the mood of the piece. The trees shiver when a helicopter hovers. Underscoring it all are chilling sounds of sirens, gunshot and zombies at the gate.

Under the sharp direction of Lili-Anne Brown, a frequent collaborator with the playwright, the actors give superb performances. Their own educational histories are even incorporated into the text. Shannon Matesky’s Caroline is hip, smart and hyperverbal, though her husky voice made it difficult to understand her at times. Behzad Dabu is excellent and enigmatic as Rolan. And beloved local actor Linda Libby is hilarious but increasingly menacing as the world devolves outside.

The production couldn’t be better, but the play could be tighter, more focused and more cohesive. Beware the zombies.